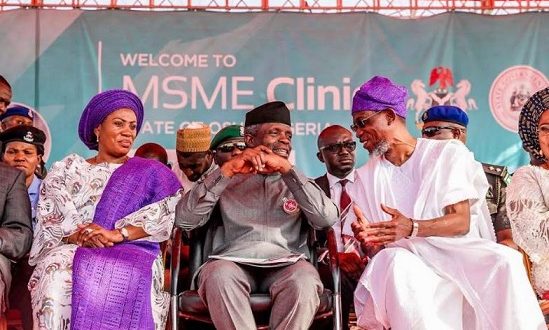 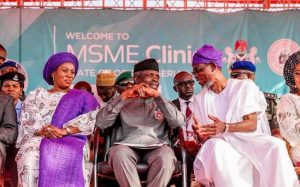 The Vice President, Federal Republic of Nigeria, Professor Yemi Osinbajo, on Thursday reaffirmed the Federal Government’s commitment to eradicating poverty, hunger, unemployment and other related vices in the country.

The Vice President while launching the Nationwide Small and Medium Enterprise Clinic (MSME) and the Government Enterprise Empowerment Programme (GEEP) in Osogbo stated that‎ 20,000 people would benefit from the initiative in Osun.

‎‎ The MSME is a Federal Government’s Empowerment Initiative under the office of the Vice President initiated to support Small and Medium Enterprises in the country.

Osinbajo stated that the scheme was initiated by President Muhammadu Buhari in a bid to support small businesses and enterprises by providing the people soft interest free loans to run their businesses.

‎ He said the present administration led by President Muhammadu Buhari having seen the SME as the powerful economic drive decided to take the bull by the horn to empower the sector as part of efforts to stimulate and re-energize the economy. Osinbajo expressed confidence in the administration of President Buhari, saying “I have confidence in the fact that our President will take Nigeria and Nigerians to greater heights.

According to him, we are here in Osun to launch another milestone achievement of the present administration in the country in fulfillment of our electoral’s promises to the people of Nigeria.

“The Nationwide Micro, Small and Medium Enterprise (MSME) and Government Enterprise Empowerment Programme (GEEP)‎ are enterprise intervention programmes of Mr. President to empower the small businesses in the country.

“This scheme was initiated to provide interest free loans to those who are into small businesses so as to empower them and as well stimulate our economy.

“To us, this scheme remains the engine of the economy and as a serious government, we have keyed into it to ensure that our people are empowered and taken out of the abject poverty and hunger.

“We have made arrangement to empower 50, 000 people ‎in Osun under this scheme so as to further strengthen the people’s commitment to businesses and as well encourage those who are into SME. “We are bent on our commitment to continue to deliver on our electoral promises as our government is determined to judiciously utilize the nation’s ‎resources for the betterment of our people”, Osinbajo added.

I have seen that Osun is one of the engine of agro-allied economy in Nigeria as this could be easily identified in the zeal of our people to economic growth and development.‎

‎He lauded Governor Rauf Aregbesola for bringing to his people the much needed dividends of democracy through his numerous human and capital infrastructural developments. ‎

“My visit has made me to see some of the good works of this administration particularly on roads, schools, security among others”, Osinbajo emphasized. Speaking earlier, Governor of Osun, Ogbeni Rauf Aregbesola charged whoever is ready to work and earn a living to key into the laudable programme.

He said the programme will empower about 20,000 beneficiaries in total starting with 10,000 beneficiaries who will get a none interest loan of at least 50,000 each. According to Aregbesola, “for those of us who are ready to work and earn money, this is an opportunity for you.

I advise you to key into the this programme and do something good for yourself. “We are happy about this because it will go a long way in alleviating the sufferings of people and assist in our efforts to banish hunger and poverty.