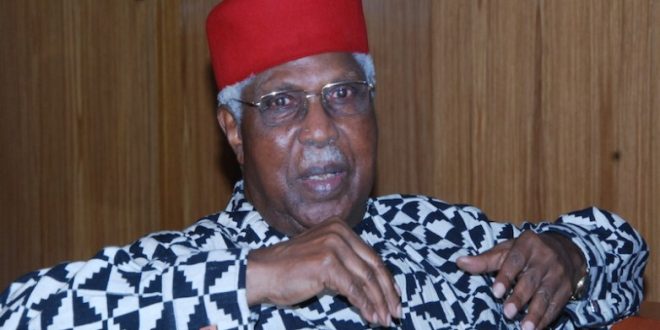 Ekwueme:Exit of a loyal lieutenant The curtains were drawn on the life of former Vice President Alex Ekwueme in the wee hours of yesterday. He passed on in a London hospital. Group Political Editor EMMANUEL OLADESU revisits his political career, his style in office, accomplishments and failed bid for the presidency.

He was an excellent example of a technocrat in politics. To him, politics was not an occupation, but a vocation. His compatriots describe him as a gentleman who could not ruffle feathers. He was a man of peace. As a private and public figure, he avoided controversy like a plague. Till he breathed his last, he was a man of integrity.

Alex Ifeanyichukwu Ekwueme, architect, lawyer, sociologist, historian, philosopher, businessman and former vice president, knew his onions. He was a successful man who ventured into politics with optimism. The motivation was service to his fatherland. Although he operated in a rough era when opulence and kleptomania filled the hearts of major operators, he was isolated from the pack as a politician who was above board.

As vice president to Alhaji Shehu Shagari in the National Party of Nigeria (NPN)-led Federal Government in the Second Republic, Ekwueme was believed to have joined a bad company. He was like a sheep in the midst of wolves.

The eminent politician was not in the class the illustrious pathfinders and nationalist politicians, who laid the foundation for an independent Nigeria. He was not even a lieutenant or associate of the men of the old order. No historian will describe him as a colourful politician, a vocal megastar and highly influential chieftain in the Second Republic, the era that threw him up as the number two citizen. It is debatable whether Ekwueme can be described as a giant of history. But, many would agree that he played his meagre role in the history of presidential democracy.

Yet, his life embodied a compendium of lessons. Ekwueme was a man of contentment. In office, he was as gentle as a dove. He acknowledged the constraints of his exalted office. He was a vice president handicapped by constitutional limitations. It may be argued that he had much prospects as a deputy president. But, he was not under any illusion that he was a deputy commander-in-chief. Under former President Shagari, he was a loyal deputy; a great spare tyre with a narrow sphere of influence, unlike flamboyant Transport Minister Dr. Umaru Dikko, party chairman Chief Adisa Meridith Akinloye and pompous NPN National Secretary Senator Uba Ahmed. A long pole separated Shagari and Ekwueme in terms of education. Despite his five degrees, including one in law and a doctorate degree in architecture, he was, according to the dictate of the presidential system, an occupant of a powerless office and a shadow deputy leader.

Although Ekwueme was not Shagari’s choice, he became a running mate by sheer fate. The former president wanted a woman as his vice.

But, the woman he had in mind, an Igbo from the same Southeast, declined the offer, saying that the job would be rigorous for a woman.

The First Republic Minister of Trade & Commerce, Dr. Ozumba Mbadiwe, also lobbied for the slot. But, Shagari tactically turned it down. Both were ministers under Prime Minister Tafawa Balewa. When his candidature was rejected, the man fondly called the “man of timber and caliber”, described the position was a “repeater station to a major station”.

Mbadiwe was later appointed as Presidential Adviser on national Assembly Matters and much later, Ambassador Extraordinary and Plenipotentiary.

In 1983, Anambra State was a battle ground between the Nigerian Peoples Party (NPP) Governor Jim Nwobodo and Chief Christian Onoh of the NPN. Ekwueme was happy that his party finally made an in-road into Zik’s prime territory. It was in the days of winning by moon slide. The euphoria lasted for three months. Onoh, like other governors, was booted out of office by soldiers.

Loyalty as a virtue

After the 1983 general election, Ekwueme’s political fate was sealed. There was no evidence that he would succeed

Shagari despite his loyalty. He was a tested and trusted ally. He was indirectly groomed for the number one position. But, loyalty, competence, experience and proximity to the prime position were not enough criteria for succession. The Yoruba in the NPN believed that the presidency would shift to the Southwest in 1987. The charismatic chairman, Akinloye, was already warming up for the office. In the four years and three months he served, there was no evidence that Ekwueme undermined or subverted his boss. But, he was not in the calculation of the party hierarchy for succession.

During the NPN national caucus meeting, the former vice president usually sat beside his boss. Both president and vice president were only distinguished members of the caucus presided over by Akinloye. In that atmosphere of party supremacy, discipline was the watch word.

That discipline was usually exhibited by the duo of Shagari and Ekwueme, to the applause of Akinloye, Alhaji Mohammed Makaman Bida, Alhaji Shetima Ali Mongonu, Alhaji Suleman Takuma, Senate President Joseph Wayas, Chief Lulu Briggs, Senator Wash Pam and Senator Olusola Saraki. In fact, Ekwueme was taken aback in 1999, when that scenario could not be re-enacted in the Peoples Democratic Party (PDP) when Gen. Olusegun Obasanjo became the president.

Already a rich architect and businessman, Ekwueme refused to participate in the widespread festival of graft that permeated the life of Shagari administration. The two leaders – Shagari and Ekwueme – watched helplessly as the looting went on. Yet, Ekwueme suffered a collateral damage. When the military that toppled the inept government went after its functionaries, the former vice president was not spared. There was no evidence of financial crime to nail him at the tribunal. He only languished in detention without justification for almost two years.

Politics in the blood

Ekwueme had been interested in politics as a young man. In the First Republic, he had wanted to serve as a member of the Eastern Regional House of Assembly on the platform of the defunct National Council of Nigerian Citizens (NCNC). He failed to get the ticket at the primary.

That was his first baptism of fire in politics. After that, he became a dormant member of the party until it was banned by the military in 1966.

His credentials are fascinating. He was highly educated. Ekwueme was also a blue blood. He was a community man. Yet, when the throne was vacant, he declined to mount it. He was the Ide of the Oko kingdom in Anambra State, where his younger brother, Prof Lazarus Ekwueme, a music teacher, reigns as the traditional ruler. He was also honoured by the Council of Traditional Rulers in the old Aguata as the Ide of Aguata Local Government Area. The local government comprise of 44 towns.

Ekwueme started primary school at the St John’s Anglican Central School, Ekwulobia. He proceeded to King’s College, Lagos. As an awardee of the Fulbright Scholarship in the United States of America (U.S.A.), he attended the University of Washington where he earned a Bachelor’s Degree in Architecture and City Planning. He obtained his Master’s Degree in Urban Planning. Ekwueme also earned degrees in Sociology, History, Philosophy and Law from the University of London. He obtained a Ph.D. in Architecture from the University of Strathclyde. He earned the BL (Honours) Degree from the Nigerian Law School.

A distinguished architect, Ekwueme started his professional career as an Assistant Architect with a Seattle-based firm, Leo A. Daly and Associates, and also with the London-based firm Nickson and Partners.

On his return to Nigeria, he joined ESSO West Africa, Lagos, overseeing the Construction and Maintenance Department. He later set a successful private business with his firm, Ekwueme Associates, Architects & Town Planners, the first indigenous architectural firm in Nigeria. His practice flourished with 16 offices spread all over Nigeria. He was the President of the Nigerian Institute of Architects.

He also presided over the Architects Registration Council of Nigeria. Ekwueme served as the Chairman of the Board of Trustees of the Nigerian Institute of Architects.

A philanthropist, Ekwueme has an active Educational Trust Fund that has been responsible for sponsoring the education of many youths to universities in Nigeria and abroad. He was a member of the Housing sub-committee of the Adebo Salaries and Wages Review Commission. He also served on the board of the Anambra State Housing Development Authority.

Ekwueme did not quit politics after his release from prison, unlike Shagari who went into political retirement. He was a delegate to the Nigeria National Constitutional Conference (NCC) in Abuja set up by the dreadful dictator, the late Gen. Sani Abacha. He served on the Committee on the Structure and Framework of the Constitution. His views were respected at the conference as an elder statesman. Ekwueme’s famous proposals at the NCC for a just and equitable power sharing in Nigeria based on the six geo-political zones have been accepted as necessary for maintaining a stable polity. The former vice president mobilised the group of 34 eminent Nigerians who risked their lives to stand up against Abacha’s dictatorship. The late Chief Solomon Lar was mandated to take a ‘sack’ letter to Abacha in Aso Villa. He was a member of the Board of Directors of Canada-based Forum of Federations. He is also a member of the Economic Community of West African States (ECOWAS) Council of Elders. Ekwueme was leader of the team assembled by the National Democratic Institute (NDI) for pre-election monitoring for the parliamentary election in Zimbabwe in 2000. He was the leader of the Organisation of Africa Unity (OAU) Observer Team to the Tanzanian presidential and parliamentary elections in 2000. He also co-chaired the 28 member-NDI/Carter Centre sponsored Observer Team to the Liberian presidential run-off election in 2005.

Ekwueme had a life-time ambition to serve as the president. It conformed with the collective political aspiration of Igbo to produce the president. To the race, it is critical to its full integration into Nigeria in the post-civil war ear. However, his thinking and style betrayed an understanding of national politics. He worked actively for the establishment of the PDP. He was full of expectation.

But, at that time, two issues were at play. The retired generals had constituted themselves into a formidable bloc in the party. Also, the Southwest was in despair and crying wolf over the annulment of the historic June 12, 1993 presidential election won by the late Chief

Moshood Abiola. The party zoned the slot to the Southwest to appease the aggrieved zone. Although Ekwueme and the late Alhaji Abubakar Rimi threw their hats in the ring, the zoning notwithstanding, they met their waterloo at the primary. Obasanjo, who did not know how the party was formed, got the ticket. Ekwueme was bitter and he did not hide his feelings.

Former President Obasanjo decided to wield both government and party power, to the consternation of the founding fathers. The PDP chairman, Lar, was shoved aside. Gradually, the founding fathers and party elders were sidelined. Although Ekwueme did not leave the PDP till he passed on, he was not active at the twilight of life. He was on reconciliation mission on many occasions, but they were almost futile.

The PDP gladiators turned a deaf ear to his words of wisdom to the party’s peril. His daughter was the running mate to Osekola Obaze, the Anambra State PDP governorship candidate in last Saturday’s poll that produced Willy Obiano Life full of lessons

. Former Governor Peter Obi and Obaze explained that it was a tribute to his stature as a father figure.

He left behind a country trying to recover from the multiple ills of corruption, economic upheavals, disunity and insecurity. More importantly, he did not realise the dream of an ‘Igbo Presidency’ in his life time.