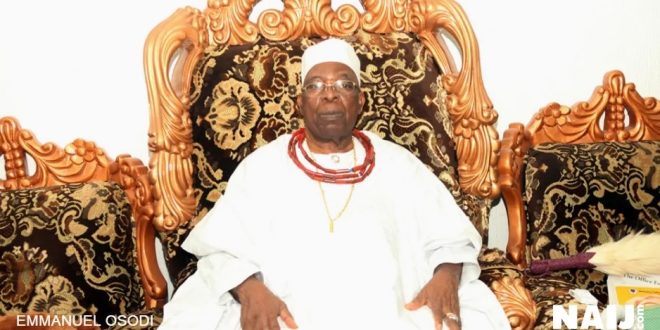 The Owa Obokun of Ijesaland, Oba Adekunle Aromolaran, has urged President Muhammadu Buhari to use the money recovered from corrupt public office holders for the welfare of Nigerians.

Oba Aromolaran, who celebrated his 80th birthday on Saturday, said this when the Minister of Health, Prof. Isaac Adewole, visited him at his palace in Ilesa on Sunday to rejoice with the monarch.

The monarch lauded the anti-corruption fight of the Buhari administration which, he said, had begun to instill fear in corrupt office holders.

He said, “The anti-corruption fight of the present Federal Government is commendable. It has begun to make Nigerians know that it is not business as usual.

“I will want the President to spend the money recovered by the anti-graft agencies on the welfare of the people.”

The minister, who is one of Aromolaran’s subjects, congratulated the monarch on his 80th birthday while lauding the roles of traditional institution in the development of the nation.

He said government had recorded successes in some of its programmes because of the coorperation and assistance rendered by traditional rulers to such programmes.

Adewole said, “Nigeria did not make a breakthrough with polio immunisation until government brought in traditional rulers.”

Meanwhile, the Archbishop of Ilesha Methodist Church, Most Rev. Amos Akindeko, has appealed to Governor Rauf Aregbesola of Osun State to repair  all the roads within the town.

Akindeko made the appeal  at the thanksgiving service  to commemorate the 80th birthday and 35 years of the reign of Oba Aromolaran, which held on Saturday.

The cleric lamented that all roads in Ilesa were in a deplorable state, saying this was contributing negatively to the economy of the town.

He said, “Mr. Governor, if you check all the roads in Ilesa you will see that they are not in good condition, and this is telling on our business and the prices of goods. We beg that you should help us in this aspect and use your power to influence this; this is the change we are begging for in the town.

“Secondly, part of what I want to let you know as the son of the soil is that, if you take a critical look at Osun State, many towns have  universities, and some of these towns are so small when compare to Ilesa. When Oyinlola was the governor of Osun he established a  university campus in Okuku. Now that our governor is from Ilesha, we also want a university.