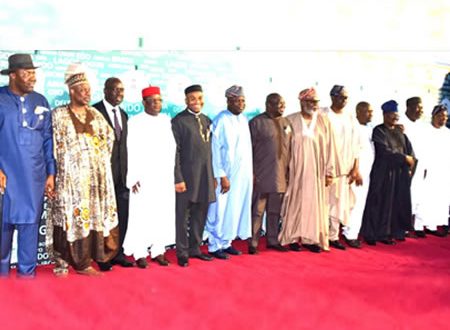 Southern governors at their scheduled meeting on Monday in Lagos reiterated their belief in true Federalism and devolution of powers, even as they also restated their commitment to united and indivisible Nigeria.

Thirteen governors and three deputy governors were in attendance, while the Imo State governor, Rochas Okorocha, was absent and did not send a representative.

Lagos State governor, Mr. Akinwunmi Ambode, who is the host of the parley, read the 7-point communique, declaring that the deliberation as very successful.

Speaking further, Ambode said the governors resolved their commitment to collaborate with one another for the growth and development of their state economy.

He said the summit emphasised priority on security of lives and properties of its citizens, even as it also emphasised the need to ensure effective linkage on good infrastructure within the space of Southern Nigeria.

The summit, according to Governor Ambode, has, however, appointed him as its chairman, while both Governors David Umahi and Seriake Dickson were appointed as co-chairmen, with next of the governors scheduled to hold in Port-Harcourt, the River State capital at a date yet to be announced.

The communique reads: “The Southern governors at their meeting in Lagos on the 23rd October restated their commitment to united and indivisible Nigeria.

“The summit also reiterated its belief in true federalism and devolution of powers.

“It restated its commitment to collaboraation with one another for the growth and development of their economy.

“The summit emphasised priority on security of lives and properties of its citizens.

“The summit also emphasised the need to effective linkage on good infrastructure with the space of Southern Nigeria.

“The next meeting is scheduled to hold in Port-Harcourt, River State.”