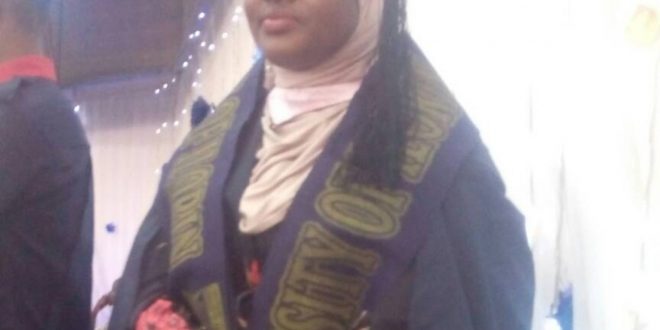 Alabi Rasheedat Adedoyin, a 22-year old Medical student of the University of Ilorin has emerged the best graduating student in Medicine and went home with 26 prizes.

Adedoyin won the  highest number of prizes yesterday during the 33rd convocation ceremonies of the University of Ilorin.

The young lady’s outstanding performance thrilled the audience in the auditorium as they respectively gave her a standing ovation.

To crown it all, her parents were invited to the high table for a group photography with the Vice Chancellor, representatives of the President and the Kwara state Governor as a mark of honour and respect to her family.

Rasheedat emerged overall best in the Faculty of Clinical Sciences, as she topped in the Departments of Pathology, Community Medicine, Paediatrics & Child Health, Medicine, Obstetrics & Gynaecology, and Department of Surgery.

Among the prizes she claimed included but not limited to the best graduating student in Chemical Pathology, in (MB; BS-Medicine), in Medicine, in Surgery, in Paediatrics and Child Health, in Physiology, in Clinical Ophthalmology.

She equally emerged the most friendly, caring, compassionate and selfless member of the graduating class (Clinical Sciences). She hails from Ede in Osun state.

It would be recalled that the best graduating student in Medicine last year was also a female, Ololade Faidat who won 14 prizes.