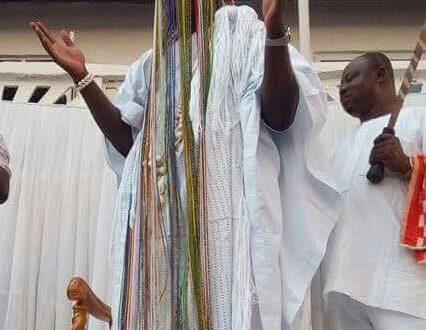 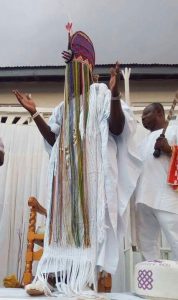 THE 2017 Olojo festival is expected to be celebrated in grand style as all road leads to the ancient city of Ile-Ife. The significance of the festival is that it brings about the unification of the Yoruba race.

The festival takes place annually in October and involves several elaborate ritual prayers led by the Ooni. It is marked in a carnival-like atmosphere and is attended by people of all ages. Olojo has remained popular in Ile-Ife because it is the only day in the year believed to be specially blessed by Olodumare (the Creator of the universe).

Aside from this, the Olojo is regarded as the celebration of first dusk and dawn, and creation of the universe. The ancient city will play host to indigenes and non-indigenes in the town, expected to come out in their multitudes to celebrate the annual festival.

All the major streets in the town will wear new looks in preparation for the festival. Besides, the whole town will be agog as the Ooni of Ile-Ife, Oba Adeyeye Enitan Ogunwusi, Ojaja II, will for the second time since his enthronement in 2015, wear the sacred Are crown.

The crown is made of 151 items, parts of which are a cutlass and a hoe. It is also believed that the crown weighs over 60kg and is worn once a year during the Olojo festival.

Olojo festival It is expected that major gods of the ancient town are appeased during this period. Regarded as the biggest festival on the culture calendar of Ile-Ife, the Olojo festival is celebrated in remembrance of Ogun, the god of iron who is believed to be the first son of Oduduwa as well as the creation of the world according to Yoruba mythology.

On the day of the festival, the Ooni of Ife appears after several days in seclusion and denial, communing with the ancestors and praying for his people. The days in seclusion are to make him pure and ensure the efficacy of his prayers.

Prior to his emergence, women from his maternal and paternal families sweep the palace, symbolically ridding the palace of evil. After this ritual, the Ooni of Ife appears in public with the Are crown.

Historically, the crown is believed to be the original crown used by Oduduwa to lead a procession of traditional chiefs and priests to perform at the shrine of Ogun.

The next stage of the ceremony is to lead the crowd to Okemogun’s shrine. At the shrine, the progenitor of Oduduwa performs duties including the renewal of oath, divination for the Ooni at the foot of Oketage hill by Araba (Chief Priest), as well as visiting places of historical importance.

Also, the traditional chiefs with the swords of office marked with chalk and camwood, appear in ceremonial attire and dance to rhythms from Bembe, a traditional drum.

The style of drumming and singing for each chief is different. Only the Ooni can dance to the drum called Osirigi. Olojo has remained popular in Ile-Ife because of its myth and history as it connotes the day in the year specially blessed by Olodumare, the creator of the universe. Prayers are offered for peace and tranquillity in Yorubaland and Nigeria.

In preparation for the 2017 edition of the festival, the Ife monarch went into seclusion and is expected to offer prayers for the town and the country.

Prior to the seclusion, the Ooni visited Ile mole, a shrine in Moore for prayers after which, he moved to the seclusion where he remained incommunicado till this evening.

Giving insight to what he will be doing during the seclusion, the Ooni of Ife told newsmen that during the period, he would offer prayers for the country and its leadership.

According to the monarch, during the seclusion, he would not be receiving visitors nor see outside. He said: “Our ancestors will be appeased during the period and by the time I re-emerge on Saturday for the grand finale, the rites will be concluded.” Speaking further, he said the festival “is a celebration of the creation of the universe and many visitors from within the country and the diaspora will come around to celebrate with us.

My duty is specifically to offer prayers and that I will do to the best of my ability.” On the significance of the festival, the royal father said Olojo is the celebration of first dusk and dawn and creation of the universe, with an assurance to work towards promoting further, all notable cultural festivals in Yorubaland.