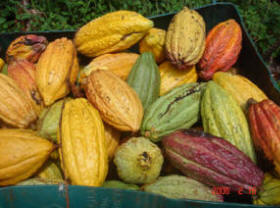 Eti Oni-Ijesa: Sad Story Of The Birthplace Of Cocoa In South West Nigeria

For residents of Eti-Oni, in Atakumosa East local government area of Osun State, cocoa production has been their specialty since 1896. They strongly hold that cocoa cultivation started from their community before its spread to other towns in Nigeria’s South West. But their pain, as they celebrate 120 years of cocoa production, is the total abandonment they have struggled with through the years. KEHINDE OYETIMI, after a visit to the community, reports their frustration and call for help.

Safe for the interaction of human voices, slanting poles with disconnected electrical cables, adjoining farmlands stretched out by many kilometres, modernity and all its trappings appeared to be far from Eti-Oni, a largely sleepy settlement.

But such communal drowsiness gave way to some merriment recently when the people celebrated 120 years of, according to them, “being the birthplace of cocoa in Nigeria and home to the country’s first plantation.”

The merriment which spanned a week had important dignitaries grace the celebration. But their joy was apparently short-lived as they settled back to reality bemoaning their fate of lack, waste and utter abandonment.

They have revelled through the many decades of their pioneering efforts in the cultivation and sale of cocoa, one of the most viable cash crops employed in the development of Nigeria’s south west region.

However, when Nigerian Tribune visited the community, it was a painful narrative of years of neglect. With no roads, schools, hospitals or any other social amenity, the settlement could best be described as one long night of inattention.

The path leading into the community from Iperindo, cut-off from the Ilesa-Akure expressway is a nightmare for any motorist. With over a four-hour drive, the Nigerian Tribune crew had a most laborious experience.

Large expanse of cocoa farms with decomposing pods, plantain and orange trees could be seen along the way. With a dusty terrain leading into the village, there was nothing inviting as one would expect. Stretches of mud houses with weak corrugated iron sheets for cover lined both sides of the streets. The few storey buildings and others in the community had either collapsed or were preparing to.

Cocoa seeds were spread in front of every available space as one moved from one end of the settlement to the other.

69-year-old Mrs Folake Oniyi, was born in Eti-Oni. For her, the government has to do something drastic to revamp cocoa production in their settlement.

“After I was born, I moved to Lagos where I spent 30 years before I moved back to Eti-Oni. I’ve been in Eti-Oni for 18 years now. It is true that cocoa has its roots here. I’m also very much involved in the business in spite of my age. I also have people who work for me.

“There are many challenges that plague us as a people. There is the challenge of bad roads. In fact many of the younger generation who were born here are not based in Eti-Oni and that has contributed in no small measure to our stark underdevelopment. We are happy that God has decided to restore our fortunes. I want to appeal to government to see to establishing a cocoa processing plant. Such an establishment with not only address the issue of unemployment, it will also help to bring our children back home. If our children come back, they will have no choice but to ensure that Eti-Oni develops further,” she said.

The Gbayewa of Eti-Oni, Chief Adeyemi David, aged 51, was also born in Eti-Oni. He bemoaned the lot of his community.

According to him, “I attended primary and grammar schools here before I left to learn the furniture business. I came back afterwards and started the cocoa business. The first settler here, Gureje, was the one who brought cocoa here and that is how it got into the Nigerian market. As you can see, it is necessary for us to have a road network so that our farm produce can get into town. Apart from cocoa which we are known for, we also cultivate plantain, okra, vegetables, among others.

“As a result of the state of the roads, it is quite difficult to transport the cocoa out and as such, the seeds turn black. Sometimes, we have to pay people from outside town as labourers to harvest the cocoa so it doesn’t get spoilt. Still there are so many complaints because of the roads and the labourers complain that the wages paid are pointless because of the cost of transporting themselves into the settlement. In a week, we transport about 30 tonnes of cocoa out of the town for sale.

Sometimes, to sell the cocoa, we are left with no choice but to accept whatever offer our buyers present else the cocoa will get spoilt, seeing as the challenges militating against proper and profitable cultivation of the cocoa. And things shouldn’t be this way. As such, we need government intervention regarding cocoa cultivation.”

Elemosho of Eti-Oni, Oni Oladimeji, aged 60, was born in Eti-Oni. “I have always been involved in cocoa cultivation. Once upon a time, this land was an enviable settlement. However, in spite of the challenges, we thank God that our lost glory is being restored. Eti-Oni used to be very popular.

The recent cocoa festival organized by our Oba is very commendable. Our challenges include the hospital and the school. Our hospital is underdeveloped and I can say we don’t have a school. When our people fall sick, they go to Ilesha. Even pregnant women in labour are sometimes rushed into town. Our school has been overtaken by weeds, and the distance to attend the school in the neighbouring community is quite long. It’s one of the reasons many of our children run away from Eti-Oni.

We appeal to government to come to our aid regarding these matters. In spite of the challenges, we still have youths interested in the cocoa business.”

The leader of Igbo cocoa farmers of Eti-Oni, Sylvester Okohon, who hails from Ebonyi State, has been in Eti-Oni for 30 years. “I moved here thirty years ago after I heard the history of Eti-Oni. Since I have been here, I thank God for the business. Our challenges have affected the opportunity to excel. However, we thank God that through our Kabiyesi, things are picking up.

The Akogun of Eti-Oni, Chief Ayotunde Ojo stated that “the cocoa business in my family, as far as I can remember has transcended three generations. Our challenges include unavailability of good roads, electricity.

We have a lot of productive ventures and we are a major agrarian community, so we need good roads to move our products into town. Sometimes, we have no choice to sell the cocoa at very ridiculous prices and sometimes, we end up with spoilt cocoa.

We also need good hospitals because we have lost pregnant women while transporting them into town because of the state of the road and the fact that we don’t have the right health facilities. We also need good schools to help our children with their future.

Chief Musbau Gbadamosi, an indigene of Eti-Oni, in an interaction with Nigerian Tribune, affirmed that Eti-Oni is the birth place of cocoa production in the south west.

According to him, “We were told that when the Kiriji war first started, Guruje, when he heard of the war, took charge of some guns – the guns sounded like ki ri ji, and that was how the war was named the Kiriji war. After the war, Guruje settled here and the place was named Eti-Oni.

He was the one who discovered cocoa. Apart from cocoa, we have other farm produce that can bring in income. Our Oba is really trying. During the cocoa festival, we had many dignitaries and we were even given a sample of the chocolate made with cocoa from Eti-Oni.

“We have many challenges. The hospital has been here since the time of the military government and you can only imagine the state. Politicians come here to campaign during elections but after we have sweated with our children to vote, those promises vanish into thin air. Eti-Oni provides home not only for indigenes, but for people from other states from all over Nigeria. It’s because of the bad road network that many of our people who should build houses here, would rather build them in Ilesa. Our school has been closed down, and I’m not sure why.

Our children have to walk about 5 kilometres on foot to the neighbouring community to go to school and we have had cases of children running away from home because of the hardship.”

Mr Tunde Olowe, aged 42, speaking on the festival, argued that “the festival is to develop the image of Eti-Oni and showcase the place to the world and let cocoa be a blessing to us. I was born into cocoa cultivation.

We also plant oranges, plantain and other tree crops. We also have traders. In South-West today, we can say that cocoa is like gold, and Eti-Oni being the birth place of cocoa, one would have expected better in terms of government attention over the years to ensure development. We need good tarred roads and development within the area. We appeal for efforts with regards to preservation and processing.

Mrs Nike Olowe, married into Eti-Oni, is also a farmer very involved in cocoa. For her, “we usually have light and there is water. However, our major challenge is the road. I have been in the cocoa business for over 30 years.”

Pa Yisa from Kogi State is a resident of Eti-Oni, who goes home from time to time. “I have been here for over 30 years. I started as a labourer until I was given a farmland for cocoa. There are many challenges of cocoa farmers and the people in Eti-Oni,” he said.