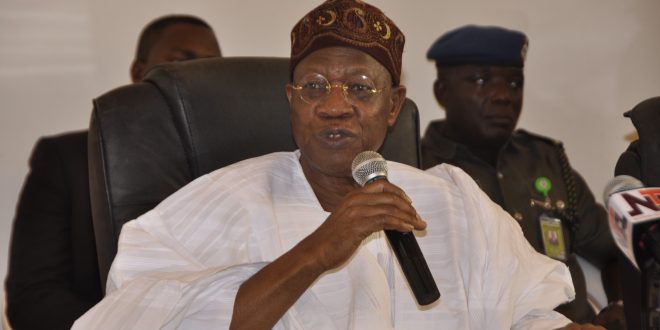 Financial headquarters of IPOB is in France -FG

THE Federal Government has identified France and the Diaspora as the sources of funding for the activities of the banned the Independent Peoples Of Biafra (IPOB).

This is coming as President Muhammadu Buhari has approved the group’s proscription as had had previously been announced by the Defence Headquarters (DHQ).

Minister of Information and Culture, Lai Mohammed, disclosed these while briefing State House correspondents on the outcome of the meeting of the Federal Executive Council (FEC) presided over by Vice President Yemi Osinbajo in Abuja on Wednesday.

“Let me tell you, the financial headquarters is in France. We know but you see, can you as a government stop sending money to your parents? You have to block the sources of finance. That is what I said recently.

“It is incontrovertible that some people in diaspora contribute money to IPOB. Where does he get his money from? We know this as a fact.

“Again, there are a few very naughty diplomatic issues which you need to skip. For instance who does not know that the IPOB internal radio is located in London? We know the diplomatic moves we have been taking and approaching the UK. All the damages it has done but they don’t see it that way. For them it’s about freedom of expression.

“If we have a person in Nigeria openly soliciting arms to come and fight the UK, what would you think of? Would you consider that freedom of expression?

“And this is a country that also has a history. What did IRA do to be labeled a terrorists organisation? They were planting bombs, they were fighting the British army.

“I don’t want any diplomatic row. We know for a fact where the funding is coming from and we are going to stop them but it’s difficult to stop them and we have been working on it and we will not stop.”

Still talking about the sponsors of IPOB, the minister also reiterated his blame on treasury looters and disgruntled politicians, saying; “I think this is not rocket science. Any treasury looter would do everything possible to distract government.

“If by any act, God forbid it, Nigeria is today engulfed in war, and Nigeria is now involved in trying to quell unrest, will the courts be spared?

“What would be the first priority of government? It will be to quell that riot. So, it is a way of distraction to ensure that government is not focused.

“So, it’s not rocket science that a person today who has a case in court or almost going to jail will try and cause confusion. He would go and support IPOB.”

Mohammed dismissed the issue of legality as had been stressed by critics, saying that if the president had been bothered by the legality of banning that group, the country would probably have been up in flames by now.

However, he conceded the rights to any group or individuals who desired self determination in a non-violent way.

The minister gave reasons why IPOB was proscribed, maintaining that it had raised its own security force, armed and engaged in extortion of innocent citizen.

Mohammed praised South east governors for their stand against the secessionist group saying that they have cut off the oxygen IPOB needed to survive.

He said: “But before I proceed, let me state clearly that it is within the rights of individuals or groups to seek self-determination.

“But this pursuit has to be non-violent. Where any group crosses the line by engaging in violence, it risks being cut to size and that’s exactly what has happened to IPOB.

“I am not interested in the semantics or legality of troops deployment or the proscription of IPOB.

“All I know is that IPOB has engaged in terrorist activities, viz: setting up parallel military and

paramilitary organizations, clashing with the national army and attempting to seize rifles from soldiers, using weapons such as machetes, molotov cocktails and sticks and mounting roadblocks to extort money from people, among others.

“To those who have engaged in semantics or legality, I ask: Which country in the world will tolerate those activities I have listed above? Which national army will look the other way when it is being attacked by a band of thugs?

“For those who are fixated with legality, I have good news for them: President Muhammadu Buhari has approved the process of proscribing IPOB, and the procedure is on as I speak.

“But I ask, if the President had been overly concerned with legality, where would Nigeria have been today? If attacks in the South-east had attracted reprisals elsewhere in the country, what would have happened.

“But for the quick action of state governors in the South-east and the North, there would have been a conflagration of immense proportions.

“Permit me to especially commend the Governors in the South-eastfor making it clear to IPOB that it has no support for its violent campaign.

“By its action, the Governors have cut off the oxygen that IPOB needs to survive.

“If the elected Governors of all the states in the South-east have banned the activities of IPOB, who then is the organisation fighting for?”

Mohammed insisted that IPOB was being sponsored by anti-Buhari elements, treasury looters and disgruntled disgruntled politicians.

He added: “I did state, during my earlier interactions, that IPOB is a contraption against the uhari Administration, and that it is being sponsored by those I call the Coalition of the Politically-Disgruntled and the Treasury Looters.

“I stand by that statement despite the noise emanating from the usual suspects. To quote the title of a James Hadley Chase novel, The Guilty Are Afraid. I will add: The guilty are always overly agitated. Good for them.

“Finally, IPOB has decided to externalise its campaign. It has written to governments and parliaments in the West alleging genocide in the South-east.

“Even a dictionary definition of ‘genocide’ does not support that claim.

“IPOB has also engaged in using highly-emotive videos of killings, which it harvested from other lands and were doctored, to hoodwink the international community.”

Asked why IPOB was considered a terrorist organisation when its members do not bear arms, Mohammed said, “I think anybody who has watched Nnamdi Kanu’s videos anywhere he goes to he openly solicits for arms and for funds.

“I have a lot of quotations from him as to the violence intention of IPOB. In one of his videos he said if he is arrested his boys should burn down the country. The same Kanu went on television a few days ago saying he was sleeping at about 4:30pm in his house in Umuahia and then some soldiers were making noises they were disturbing his sleep and his boys stopped them.

“I ask him which country in the world would tolerate this. Unfortunately, Nigerians we have short memories at times, or we tend to be very mischievous because this thing is being turned into, o, the North is persecuting the south east or Muslims persecuting Christians.”

He recalled that the Maitatsine sect was made up of Muslims and crushed by both the Shehu Shagari and Buhari’s military administrations.

He also noted that Boko Haram were Muslims and had been fought by the late President Umaru Musa Yar’Adua’s government.

Mohammed added: “Honestly, Nigeria has been very lucky. Last week, there would have been massive bloodshed if reprisals had taken place outside the south east and it didn’t take place because our traditional rulers, our governors and other leaders went out to pacify people and the kind of stories that has been trending on the social media have not helped things.

“As a matter of fact, there was one stating that a major general had been killed, not knowing that it was a retired major that was killed in Benue state over land matters. That would have set the entire country ablaze.”

He further said: “You can imagine what would have happened if the people of Kano or Kaduna started retaliation. So, we are in a very dangerous situation and actually we are sitting on a keg of gun powder.”

“Is there anybody here who can tell me which part of Nigeria genocide is taking place?  It is not true but of course we are in the era of fake news and artificial intelligence where you can make a video of what is happening in Iraq, super impose pictures in Nigeria and voices and send it. People are gullible including some foreign countries.

“On the basis of that, we have heard some funny bones saying that Nigeria should be expelled from the United Nations because they are perpetuating genocide.

“This government will not stifle anybody’s freedom of expression, but when you cross the line for the sake of national unity, we won’t allow you.”

On Buhari approval of the proscription, Mohammed said: “There is a procedure for proscription. The President must sign the proclamation after which the Attorney General will follow the procedure which he is doing.

“But for me, do you want the President to wait for this to be put into law before you take action and stop looting or killing?

“Where will Nigeria be today if there is conflagration in Lagos or Kano?”