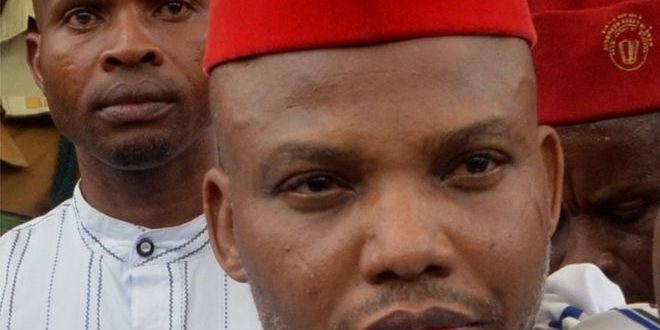 Nothing has been heard about Kanu since the proscription.

Some sources yesterday said he had gone underground.

Kanu is on bail for the alleged treason charges preferred against him.

The Nation learnt  yesterday that  his bail sureties might be asked by the security agencies to account for him.

Investigators are said to be analysing a  video clip of Kanu and a Turkish citizen  as part of the probe.

A source, while confirming the search for Kanu, said: “Troops have been given a firm order to fish out and arrest the IPOB leader. As a prelude to it, the Defence Headquarters on Friday  declared IPOB as a terrorist organisation.

“Intelligence has, however, revealed that Kanu might have gone underground. As I speak with you, troops have actually searched his house and he was not found there.Troops have a mandate to arrest him wherever he might be.”

Asked what if he is not found the source said: “ We might follow legal process by holding his sureties responsible. These sureties will have to produce him.”

On the probe of Kanu’s alleged foreign links , another source said:”We are looking into the allegations of foreign support for Kanu. We are doing a profiling of his foreign contacts. We have some clues but we need to dig deeper.”

The Nation can also confirm that  government insisted on non-withdrawal of soldiers from Abia State to avoid a situation whereby the  IPOB will “take advantage and unleash mayhem” on innocent citizens.

Sources said the   presidency overruled Abia State Governor Okezie Ikpeazu on the withdrawal of troops because the police alone could not  cope with the “grave security” situation.

“The governor wanted a political solution to a military matter. But the federal government cannot watch and allow the situation to degenerate,” one of the sources said.

“Before Kanu was released on bail, these same governors in the Southeast, political leaders from the zone and others prevailed on the federal government to allow him home.

“Some of these governors and Igbo leaders made a commitment that they would  ensure that Kanu did  not abuse his bail conditions.

“The government bent backwards and ensured that Kanu was released on bail. But you can see what has happened. All those who gave the guarantee that Kanu would  respect his bail bond have been made to look foolish.

“Intelligence on IPOB revealed that without troops on the streets, the situation would have been worse.”

The  Embassy of the United States has asked Americans in Abia and Plateau states to review their security and maintain a high level of vigilance.

The Embassy’s cautionary note was contained in its travel alert.

It said: “Curfews have been declared in Abia and Plateau states because of violent attacks accompanied by threats of reprisals.

“Exercise caution in these areas; review your personal security plans; remain aware of your surroundings, including local events; and monitor local news stations for updates.

“Maintain a high level of vigilance and take appropriate steps to enhance your personal security.”

In a statement in Abuja, Owie said the declaration smacked of double standards.

He said: “Now that IPOB has been declared ‘Terrorist group, the government should immediately declare Fulani herdsmen, Terrorist group.”

Owie added: “I urge President Muhammadu Buhari-led federal government to walk the way of justice and equity in handling the affairs of Nigeria and stop pretending that all is well.

“The gravest mistake of non-equitable administrations all over the world is the denial of wrongdoings on their part.  Unfortunately for such administrations, they forget that God cannot be mocked.”