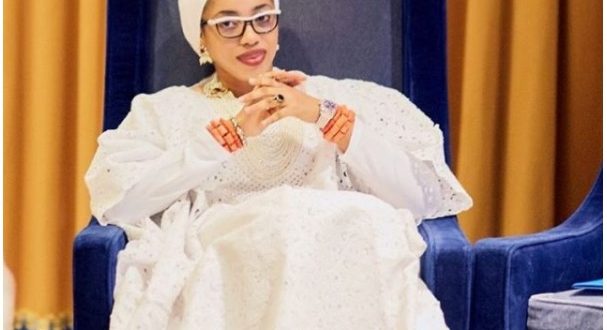 The now ex-wife of the Ooni of Ife, Zaynab Otiti-Obanor, has confirmed that her 17-month-old marriage to the monarch, Adeyeye Ogunwusi, has indeed ended.

She made the disclosure via an official statement on her official Instagram page on Wednesday morning. Her post partly read, “What I can confirm, is that the Ooni and I are no more. I inhale love and exhale gratitude. My journey continues as a humanitarian aiding women and victims of domestic violence & abuse with the United Nations. No matter how much time you’ve invested, no matter the use of media to silence & manipulate, no matter the circumstance, slander, embarrassment, threats and lies: Get out and seek immediate help!”

Ovation Magazine publisher, Dele Momodu, who had also earlier dropped hints of the separation confirmed that the royal union had indeed crashed in an Instagram post on Wednesday. He wrote: “Our Majesty,  blessed are the peace makers. Thanks for the honour of pouring out your immediate and future plans to me. Thanks for vowing not to disrespect the revered throne of Oduduwa; the progenitor of the Yoruba race. When marriages break up, it comes with painful stress and traumatic strain.The pressure can be lessened by staying positive. It shall be well with you.”

Mr. Momodu’s post generated mixed reactions from Nigerians with many saying it was uncalled for.

However, despite the public empathy, Olori Wuraola appears to have moved on.

In the last two weeks, there have been growing concerns on the state of the royal union following reports that the couple had been living apart in the last 8 months.

The Ooni got married to his now estranged Edo bride at an elaborate traditional marriage held in Benin, the Edo State capital on March 16, 2016.

The wedding rites were performed in the traditional Benin culture at the residence of the bride on Ewere Street, Etete, in Oredo Local Government Area of the state.

Although the monarch was not physically present, he was represented by his father, Oluropo Ogunwusi.

@CitizenOsun
Previous OSUN @ 26 “We will overcome any challenge we face Our best is yet to come” – Aregbesola
Next Osun state govt, ANDP to build 5,000 housing units …Ede, Iwo, Ikirun, Ilesa and Ila-Orangun to benefit