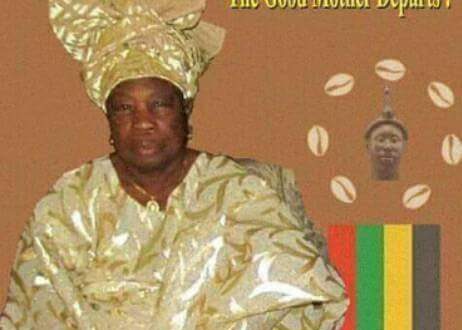 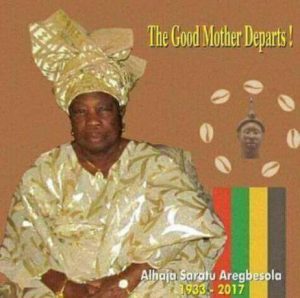 Alhaja Saratu Aregbesola, the mother of Osun State Governor, Ogbeni Rauf Aregbesola, lived a full and exemplary life. She was a good woman by the Islamic, Yoruba culture and universal human standards. She was a good wife, a great mother, a deeply devoted Muslim and a philanthropist.

She spent her early and formative years in Ilesa with her paternal aunt, Madam Ayisatu Esho Aduroja (Iya Onila), a famous okra trader in Idi-Oshe market, in Okesa Ilesa.

Young Saratu Ali-Balogun Aduroja met her husband, Alhaji Ahmad-Rufai Ali-Aregbesola from Ogbon Arogbo in Ilesa, and they got married on October 1, 1951. The trajectory of her life eventually followed that of her husband’s from that golden moment.

As it is with every Ijesa indigene, whose provenance must be a remote countryside, Alhaji Rufai’s provenance was Urogbo village, Atakunmosa East Local Government Area. He was a dashing young man who had learnt the modern vocational craft of carpentry and joinery. Then, it was a modern art form introduced by Europeans and returnee slaves from especially Brazil but was a wonder to the locals who lived mostly in mud and thatched roof houses.

By stroke of circumstances, Pa Rufai was engaged by the contractor handling Saint John’s Anglican Church, Iloro, Ilesa in his Ifofin neighbourhood, for the carpentry and joinery work of a new cathedral being built there. The cathedral remains an imposing architectural masterpiece till today. The contractor was Pa Aliyu from Ikare-Akoko.

However, after the completion of this building, the contractor moved to another project in Ikare-Akoko, the construction of the Chapel of the new Anglican School in the town; Victory College, Ikare-Akoko in present Ondo State, the northernmost political division of Western Region. Being impressed with Pa Rufai’s skill, dexterity and diligence in Ilesa, he quickly invited him to be part of the new Chapel he was building again in Ikare.

Pa Rufai took his second wife to Ikare where he had settled and found accommodation.
God blessed his work and prospered him in Ikare where he had all his children, was able to build his own houses in both Ikare and Ilesa, owned vehicles, trained all his children and lived a comfortable middle class life.
He returned to Ilesa later in life where he lived the rest of his life before his passage on July 29, 1992.

It was the manifest destiny of Alhaja Saratu to embark on this journey of life with her husband. These were the circumstances that shaped her own life and cut her persona. It was in this course that she manifested her sterling qualities as wife, mother, a devout Muslim and good citizen.

Mama was an astute trader who learnt how to trade from birth. It is often said that it is in the DNA of every Ijesa to be enterprising. During her growing up years, it was the practice for Ijesas to travel to far and near places for trading; either to bring essential goods to their people or take needed goods and items to others to buy. They were also very shrewd business people.

The Ijesas would be quick to persuade a customer to buy on credit, usually textiles and household goods, and would wait until he or she wore the cloth or use the items before returning to importune the debtor for payment, which often involve embarrassing methods.

Mama was a good trader who moved from petty trading to sedentary but big kolanut trading, for which she became famous in Ijesaland and beyond. She not only mastered the trade, she became a leader of Kolanut and bitter kola traders.

Since her return to Ilesa with her husband, she had lived in the family house. The only occasion she had to seek refuge elsewhere was on account of her son, Ogbeni Rauf Rauf Aregbesola, who was contesting to be governor of the State of Osun in 2007. The politics of bitterness at the time blinded the party in power in the state at that time to basic rule of decency. When threats to her life could no longer be ignored, she relocated to Lagos after the governorship election of April 14, 2007 and could only return in August, 2011 after her son regained his mandate.

Mama was blessed with five children: Alhaja Wosilat Adunni Oseni-Ishola (deceased), Rauf Adesoji Aregbesola, Amudat Adenike Oladeji, Bashiru Adediran Aregbesola and Sikiru Oladele Aregbesola – and many grandchildren and great grandchildren, who are all doing well in the paths they have chosen for themselves.

Though we missed her, we are filled with joy that her vivacious spirit remains with us and she continues to live through us in the seeds of discipline, hard work and motherly love she had sown in us.

ALHAJA SARATU ASABI AREGBESOLA (IYA OLOBI) lived a true life of service to Allah SWT and humanity.
A Mother in a Million
Mama was all and more that a mother should be – caring, loving, adoring, guiding, mentoring and mothering. She shaped my life and guided my steps. She was loving and strict, tender and tough, charming and harsh, warm and caustic, loyal and supportive, throughout our relationship.
May Allah SWT reward her with Aljannah Firdaus. Amin.

@CitizenOsun
Previous Moving from an annual salary of $64,000 to starting my own business from the scratch was not a child’s play – Olamide Ayeni-Babajide; CEO, Pearl Recycling
Next Lagos residents uncover kidnappers’ den… set two suspects ablaze