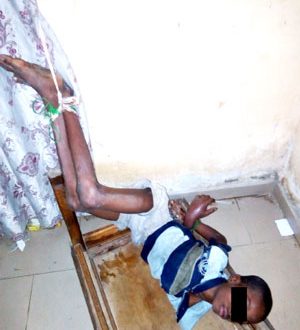 Father burns 13-yr-old son with iron, ties him to window for 3 days 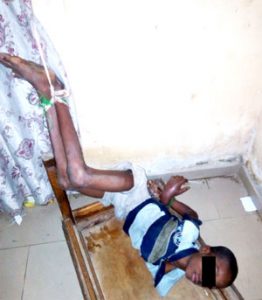 Father burns 13-yr-old son with iron, ties him to window for 3 days

A father of five, Austin Segun, who tied his 13-year-old son to a burglar-proof for three days because a Church leader said the boy was a wizard, has been given an ultimatum to leave Eruemukohwarien community, Ughelli North Local Government Area of Delta State. Mr. Segun was said to have been released on bail after he was arrested and detained at the Ughelli ‘A’ Division Police Station over the incident.

The victim, Tobi Segun, who just finished his Primary 6 School Leaving Certificate exams, was rescued by a group of vigilante, who heard him whimpering at about 2a.m.

The 13-year-old boy tied by his father to the window for three days after he was burnt by iron captivity. Rescued One of the vigilante members, who rescued the victim, told Vanguard that during their routine night patrol, they heard the faint cry of the boy saying he wants to die and that he can no longer bear the torture.

The vigilante member, who spoke on condition of anonymity, said: “Immediately, we alerted the community Youth Chairman and others. When we gained access into the house, we saw the boy alone, tied to the window protector while his hands were tied behind him.

“Though the parents were not at home, the landlord called the father on phone while the community Youth Chairman alerted the DPO of the Ughelli ‘A’ Division, who personally came and arrested the suspect.”

Why we tied him—Step-mother Confirming the incident to Vanguard, the victim’s step-mother, Mrs. Edijala Favour Segun, said: “They told us that he is a wizard at a Church we went to for prayers and he also admitted that he is a wizard. “At a point, my husband had to use a hot iron to burn his palm and feet owing to his misbehaviour. Despite this, he opened the fridge in the house and ate everything.

“This led to my husband tying his hands and legs to the protector. He had just been tied for three days before we were arrested. “On that day, our landlord called us on the phone that we should come back to the house.

On getting home, we were faced with a crowd that started hitting my husband and me. “After some minutes, the Police came and arrested my husband, while I was asked to take Tobi to the Ughelli Central Hospital for treatment. “My husband was able to secure his release, but the IPO in charge of the case ordered that we should move out of the community.

This was documented and we all agreed to it including leaders of the community.” Recounting his ordeal to Vanguard, Tobi said: “I always run from the house because I am not comfortable. My mother is dead and the woman here is my step-mother.”

@CitizenOsun
Previous Driver, 31, rapes 20-yr-old girl pretending to be Angel from God …I told her not to sleep in her father’s house that night, that I’m the angel God sent to save her life from death – Rapist
Next Adulterated Kerosene: 4 siblings killed in explosion in Rivers! … As mother roams about begging for help