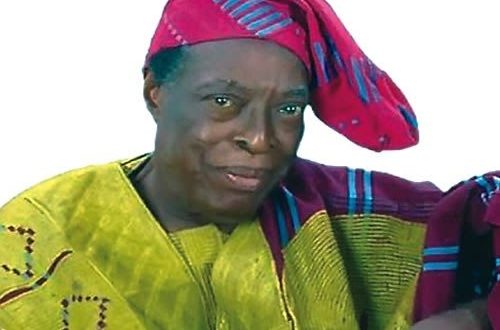 GOVERNOR Rauf Aregbesola of Osun State, on Monday described the demise of Pa Adebayo Faleti as a great loss to Yoruba race and the creative world

In a statement signed by his director, Bureau of Communication and Strategy, Office of the Governor, Mr Semiu Okanlawon, Aregbesola said the death of the playwright, theatre director and teacher was a huge loss not only to the creative world alone but also to the world of Yoruba language and culture heritage which he promoted till his death.

While noting that Faleti was an epitome of a virtuous theatre ambassador, he said “he was an actor, director, choreographer and designer – who created performance spaces influenced by traditional architectural forms.

He stated that the exit of Faleti will certainly create a yawning gap in the theatre and cultural world.

‘His appearance and personality attested to the promotion of Omoluabi ethos the Yoruba people are known for and which the State of Osun stands for and promotes in all facets of human endeavours.

‘Faleti exemplified the advocacy for and exhibition of Yoruba Language and culture in his writings and on stage particularly with one of his celebrated novels, Won ro pe Were ni.

‘’Thespian of a first class mold and a cultural ambassador,  Faleti will not be forgotten for his immense patriotism and sincere commitment to a better Nigeria and promotion and contributions to Yoruba Language and Culture.

‘’On behalf of the government and people of Osun, I convey our heartfelt condolences to the immediate and extended families of the late stage icon, Oyo State Government, literary and drama communities.

@CitizenOsun
Previous MONEY RITUAL: HERBALIST DUPES THREE LADIES OF N3.61M IN LAGOS! … Says “I have to sleep with them to complete the ritual”
Next Fayose wants to be Vice President and Omisore wants to be governor by all means! – Kasamu