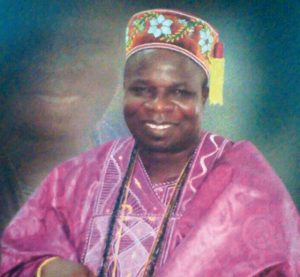 Why Oluwo Is After My Life — Oluwo-Oke, Oba Kadiri Adeoye

Oluwo of Iwo Oke, Oba Kadiri Adeoye, in this interview with FEMI MAKINDE alleged that his counterpart, the Oluwo of Iwo, Oba Abdulrasheed Akanbi, vandalised his shopping complex in Iwo town

What is the relationship between Iwo and Iwo Oke?

Iwo Oke and Iwo town are from the same ancestors. There is no difference between the two towns.

Why do you have two monarchs in the towns then?

Each of us has a separate domain but we are children of the same parents. We came from Ile Ife to our present domains. Obaloran was our father and our mother was Luwo Gbagida who gave birth to 11 children and six died. She consulted the oracle and she was instructed to come and establish a town for the remaining children. Luwo Gbagida was a king during her time. She is number 18 on the list of the Ooni of Ife.

The children, therefore, settled in Iwo. Telu was the eldest of them. Telu gave birth to Oluwo Oke. The four of them, after leaving Ogundigbaro, landed at Igbo Orita and that was where Telu and his siblings were buried. They later re-established the town and when there was dispute, Oyegi, Telu’s first born, was given the right, as the eldest son, to become the king ( Oluwo) but his younger brother said that it was his right to be the king. To avoid any crisis, Oyegi relocated and moved up and that was how he established Iwo Oke. There is also Iwo Ate; this town is after Ife Odan. Iwo Ate is in Oyo State now. We are all siblings. Iwo Oke is in Ola Oluwa Local Government Area here in Osun State.

But what is the problem between you and the Oluwo of Iwoland, Oba Abdulrasheed Akanbi?

This Oluwo wants to rewrite the history of Iwo town. But there is no way you can rewrite the history. He started this when we went to Ile Ife for a ceremony by our father, the Ooni of Ife. We went for the church service and during the reception, Oluwo came in and we all greeted him. I was asked to pray in the Muslim way and that the Onigbaye of Igbaye should pray in the Christian way. I went to  Oba Ifewara to thank him again for coming to my 10th (coronation) anniversary. Onigbaye then called me and said, ‘Oluwo Oke, your father the Oluwo has come now’ and I told him that Oluwo is neither my father nor superior but that we are siblings.

Are you saying that the two thrones are equal?

Oluwo is a younger brother of Oluwo Oke, if you follow my narration. Oluwo Ate is also senior to the Oluwo. So, I told him ( Oluwo) that he was not my father nor my superior. I told him that the person, who established Iwo Oke and Iwo were siblings. So, there is no way Oluwo can be my senior or father. It is not possible except for those who want to turn history upside down. He (Oba Akanbi) flared up and said he would dethrone me. He said I was a chief and not an Oba. I was shocked to hear this and I told him to go and check the facts about Iwo Oke in the archives. I told him that I was neither a chief nor one of those he installed.

He became very angry and even wanted to fight but I just left. Other monarchs present at the ceremony pleaded with me and I left. Ooni’s wife also begged me not to fight.

But before I got home that day, my senior wife called me on the phone and told me that some hoodlums had gone to vandalise my shopping complex in Iwo. I was surprised and I even thought it was a joke. They stole rice and some other things.

Who were those hoodlums?

They were the thugs, who Oluwo used to terrorise the people. I went and reported the case at Zone 11 in Osogbo. I got the names of some of the thugs and they were arrested by the police from Zone 11. Those arrested were taken to Osogbo and the Oluwo went there to secure their bail. When I heard of it, I told them at Zone 11 that if he secured their bail from the police, I would report them to the higher authority so they became helpless. They did not release them and they were brought to court and arraigned.

Oluwo sent the divisional police officer in Iwo to the DPO in Ola Oluwa Local Govt Area of the state to tell me not to appear in court. He said I would be dealt with if I attended the court. I did not go to the court that day just to ensure that there was no breach of public peace because I am for peace. He brought thugs to court but I sent some of my chiefs and sons to go and witness what would happen at the court.

Some of his thugs saw my SUV (Sports Utility Vehicle) and vandalised it. They thought I was the one inside, but my people escaped. The second day, Oluwo went with thugs and some policemen to my shopping complex, the same one they vandalised. He said he had seized it and that I must not step into Iwo land again. They shot into the air and they asked those who rented shops to vacate the place.

So, which case is now the one before the Magistrate Court in Osogbo?

So, it is the case of destruction of your property?

When the case was brought to Osogbo, the matter was split into two. His own case and the one about his hoodlums.

Which one is Oluwo’s case?

His case is the one that has to do with the threat to my life because he sent hoodlums to either injure me or kill me. That is the case he is answering.

He also said you are behind rumours of his involvement in advanced fee fraud?

This is also in the affidavit before the court. I learnt that he travelled to Abuja to settle himself when a problem arose on this Yahoo Yahoo issue.

Do you know anybody that he duped?

I don’t know of any but you will agree with me that there is no smoke without fire. There is no way he will be completely innocent and people will say he is into fraudulent activities. It is not possible.

The way he behaves depicts that the allegations might not be far from being true. I enjoyed a good relationship with his predecessor. I prayed for him always until his transition. But this Oluwo chases good people away and embraces hoodlums and Indian hemp smokers. He has chased away the chiefs and the elders at the palace. So, if they say he is into fraud, how will one deny this? If there is any crisis, the next thing he does is to send those hoodlums to go and deal with whoever he has issues with.

Is it true that some prominent monarchs are the ones prompting you to destroy Oba Akanbi’s reputation?

Am I a kid? Is it possible for someone to send me to go and destroy another person at my age? Who are the kings that asked him to go and vandalise my shopping complex? Are they the ones who asked him to be using hoodlums to terrorise the people?

Nobody is using me. In fact, all those monarchs have been telling me to withdraw the case from court. He said the Ooni is the one financing me. That is not true. He claims he and Ooni are friends and that he was instrumental in the emergence of the Ooni. That is none of my business. But if that is correct, why is the Ooni not behaving like him? Nobody is using me and is it a crime to stand up for my right when he used thugs to vandalise my property?

This is ridiculous. The magistrate ordered that he must appear and he said no. Is he bigger than the court? The President of the Senate, Bukola Saraki, despite his influence and wealth, appeared in court. So, who is Oluwo? There is nobody above the law. That is why the law is depicted as a blind person with a big sword in its hand. If the allegations against him are not true, he should go and tell the court.

He said the magistrate court is too small for him. Can one say that even to a customary court? Nobody is above the law and his insistence that he would not appear before the court shows that he is guilty of the charges against him.

Is it true that anybody who is the Oluwo can become the Ooni of Ife?

It is not possible! How can that happen? Oluwo can never become the Ooni. Our father was from another family but our mother, Luwo Gbagida, was the Ooni during his time. No woman has ever been crowned as the Ooni during the time of our mother. How come a child will go to his mother’s place to fight for a chieftaincy title when there are male children within the family?

We are kings in our own domains here, so why should we poke our nose into chieftaincy title from our maternal side. There are male children there, who are qualified. So, it is not our right, anyone who says that does not know what he is saying. Obaloran, our father, who the Oluwo is calling a chief is not a chief but an Oba in Ife. There are many obas in Ile Ife, apart from the Ooni.