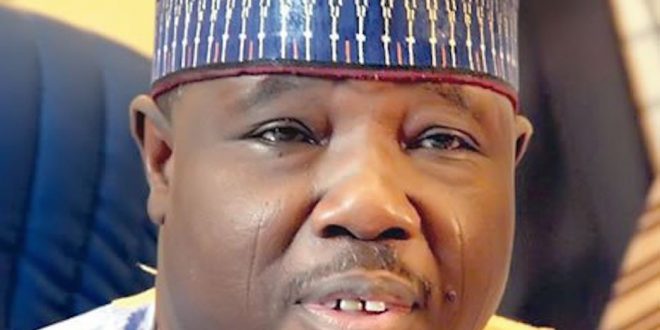 The Supreme Court has sacked Ali Modu Sheriff as the National Chairman of the Peoples Democratic Party (PDP).

A five-man panel of the court, in a unanimous judgment, held that the Ahmed Markafi-led National Working Committee (NWC) is the true leadership organ of the party.

Justice Bode Rhodes-Vivour read the lead judgment. He validated the National Convention of the party held in Port Harcourt on May 21, 2016, during which the Sheriff led National Executive Committee, NEC, was dissolved.

He said the convention was not conducted in disobedience to any court order.

Justice Rhodes-Vivour held that the majority judgment of the two of the members of the panel of the Port Harcourt Division of the Court of Appeal, delivered on February 17, 2017, was perverse.

He accused Sheriff of engaging in forum shopping, saying he “displayed infantile desperation to cling to office at all cost”.

Justice Rhodes-Vivour upheld the judgment of Justice Mohammed Liman of the Federal High Court in Port Harcourt, Rivers State delivered on July 4, 2016, and the subsequent dissenting decision of a member of the three-man panel of the Port Harcourt Division of the Court of Appeal, which both validated the removal of Sheriff as the National Chairman at the party’s national convention held on May 21, 2016.

He identified two issues for determination, which he resolved against the Sheriff-faction, based on the interpretation of relevant provisions of the PDP constitution.

On the first issue, Justice Rhodes-Vivour said the suit filed by Makarfi faction before the Federal High Court in Port Harcourt, was not an abuse of court process as wrongly held by the majority judgment which formed the decision of the Court of Appeal.

On the second issue, he said the national convention of the party, held on May 21, 2016 was convened legally and in accordance with the party’s constitution.

He said by the provisions of the PDP constitution, it was right for the PDP Deputy National Chairman to preside over the convention after Sheriff abandoned the convention and attempted to call it off.

Justice Rhodes-Vivour said the convention acted rightly and not in breach of any aspect of the PDP’s constitution by setting up the Makarfi-led National Caretaker Committee.

He said: ruled, “There can be no doubt, after examining the articles of the PDP constitution, that the national convention has enormous and sweeping powers over the affairs of the party.

“When the first respondent (Sheriff) abandoned the convention, the PDP Deputy National Chairman presided over the convention in accordance with Article 35(2)(b) of the Constitution of the PDP.

“At the National convention, far-reaching decisions were taken accordance with the PDP constitution.

“Furthermore, the Court of Appeal was wrong for its findings and came to a perverse conclusion after examining only Article 47(d) of the PDP constitution. It should also have examined other articles.

“If it had done so, it would have come to the conclusion that the national convention acted according to the PDP constitution.

“It is also to be noted that the motion for the removal of the National Working Committee was brought pursuant to provisions of article 33(5)(d)  of the PDP constitution,” the judge said.

He therefore held that all the resolutions passed and adopted at the convention, sacking the NEC and the NWC of the party was valid.

He further said: “In the end, it is clear to this court that suit number FHC/PHC/CS/524/2016  is not an abuse of process

“The national convention which was held on May 21, 2016, in Port Harcourt, Rivers State, was properly convened.

Justice Rhodes-Vivour said, “The stakes are very high in political battles. So, if allowed, political office seekers will not hesitate to file multiplicity of suits on the same subject matter hoping to get a favourable judgment from one court or the other.

“Heads of court must by now be aware of this trend and stop this annoying practice of assigning cases of the same subject matter to different judges.

“This is unhealthy  and renders the process completely useless, ending up making the judiciary a laughingstock.

“Trial judges must also be on the lookout and refrain from receiving cases when aware that a brother judge is handling a similar matter.”

Justice Rhodes-Vivour frowned at Sheriff’ conduct of filing many suits, which were abandoned and would continue to gather dust in judicial archive.

He held, “The respondents (Sheriff group)  and their allies filed over 10 suits. The Court of Appeal has this to say; ‘the first appellant’, I agree, ‘displayed an infantile desperation to cling to office at all cost’.

“The first respondent was unpalatable desire to cling on to office.That desire was desire was deployed relentlessly by filing over 10 suits. Most of which have been abandoned. They shall forever gather dust in judicial archive,” Justice Rhodes-Vivour said.

He dismissed the preliminary objection filed by Sheriff, in which Sheriff argued that the appeal by Makarfi faction was invalid on the ground that it was filed in the name of the PDP, which he (Makarfi) was no longer in control of after the February 17, 2017 judgment of the Court of Appeal.

Sheriff, who had always attend court, stayed away yesterday. Makarfi was in court, accompanied by a large number of PDP chieftains.

A notable face from the Sheriff camp was Deputy National Chairman of the faction, Cairo Ojougho.