Breaking News
Home / Uncategorized / It’s shameful Adeleke’s brothers’re using his death for blackmail – Aregbesola … Says “I never took a kobo from Deji, the Adelekes are the ones always coming to me for favour” 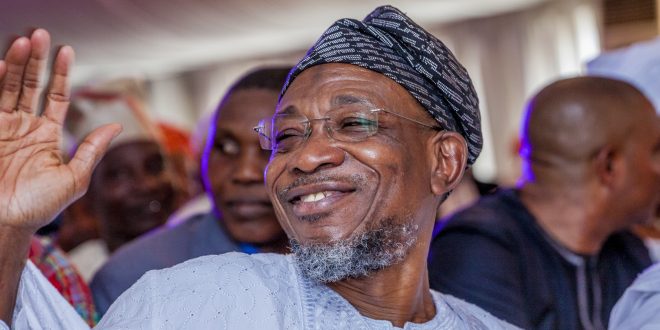 It’s shameful Adeleke’s brothers’re using his death for blackmail – Aregbesola … Says “I never took a kobo from Deji, the Adelekes are the ones always coming to me for favour”

WOMAN TO COURT: MY HUSBAND SMOKES HEMP, BEATS ME WITH CUTLASS WHEN HE’S HIGH

WOMAN TO COURT: MY HUSBAND STOPPED MAKING LOVE TO ME 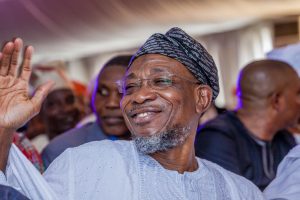 … Says “I never took a kobo from Deji, the Adelekes are the ones always coming to me for favour”

Governor Rauf Aregbesola of Osun state, on Wednesday, expressed regrets that the family of the late Senator Isiaka Adeleke has been using the unfortunate incident of his death to manipulate the minds of the people of the Ede ancient city. Aregbesola said it is sad that since the death of the former governor of Osun in April, many lies and fabrications have emanated from the family and few of his loyalists.

He said among the lies being peddled against him and his government include the fact that the younger brother of the politician, Dr. Deji Adeleke, claimed that he borrowed the Aregbesola government money to pay workers salaries.

He said it is also unthinkable that the Adeleke family would claim that Aregbesola begged Senator Adeleke to join APC. Aregbesola stated these when he led the campaign train of Senator Mudashir Husain to Ede in the series of mega-campaigns ahead of the July 8, 2017 senatorial election.

Ede is the home town of the late Adeleke.

This was just as the Governor, along with the Timi of Ede, Oba Muniru Adesola Lawal, sued for peace, stating that the coming election should not be allowed to cause crisis. The Governor said any place where peace is absent, there is always and will never be any development.  He stated that God chooses whom he likes as a leader and so, politicians should tread cautiously. ‎

He also said that APC did the best it could for the first democratically elected Governor of the state when his then party, People’s Democratic Party, PDP, treated him badly by not giving him the Senatorial ticket then. Aregbesola stated that it was the late senator who came to APC uninvited because of the treatment he received in the PDP.

On the purported claim in some quarters that the Adeleke family helped his re-election, the Governor said he never collected a Kobo from the younger brother of the late Senator, Dr. Deji Adeleke or any of the Adelekes.

‎He added that his administration has never, for any reason, borrowed money from any individual or group to meet the state’s statutory obligations.

Aregbesola noted that with the volume of workers’ salaries’ arrears and pensions at that time, no individual could lend the state the amount required at that time.

According to him, “Deji Adeleke does not have the financial capacity to bail out Osun from  ‎its financial challenges even before now, not to talk about lending us money to pay workers’ salaries. If anything at all, it is their family that sought and got favours from the Osun State Government under my watch.

It is to the glory of God that they got the Certificate of Occupancy of their university from our government. Why didn’t those who are their new friends give them C of O of that university? “If Deji Adeleke has so much money, why is he begging me to waive the payable tax of his university? Why cant he just pay? “I am bold enough to say this over and over again, because I have never sought for assistance from any of the Adeleke’s family even during the life time of Senator Isiaka Adeleke, nothing as such occurred.

“Though my relationship with late Adeleke was cordial and beyond politics because we have known each other even before Osun politics because our residences are adjacent to each other in Lagos state. “He was a good brother and a friend to me while alive, but during this dire economic period, I never approach him for any financial assistance not to talk of obtaining cash from his brother.

The governor commended the monarch for calling for peace to reign in the entire senatorial district before during and after the election. Aregbesola said it is the responsibility of the Oba to make sure peace reigns in his domains. According to him, “if the monarch fails to guarantee peace in his area, he will be the first person to be blamed for shirking in his responsibility. “I am very happy that you called for and preached peach to the people.

As we all know there is no iota of gain in causing chaos. And I must say here, Kabiesi, that peace in a town is the responsibly of a king. And if he fails in his secure that peace he will be the one that will be held responsible.” The campaign ground witnessed  huge crowd of residents from Ede.