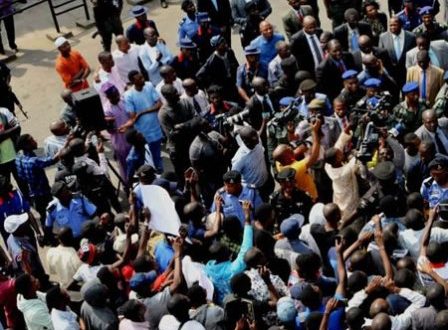 Students of Ladoke Akintola University of Technology (LAUTECH), Ogbomosho took their protest to the National Assembly, on Thursday, over the closure of their institution for over nine months following an industrial dispute between staff of the institution and the government of Oyo and Osun states.The protesting students who stormed the National Assembly with a petition demanding for the Federal Government to completely take over their institution were addressed by the Leader of House of Representatives, Femi Gbajabiamila, in company of the House Deputy Minority Leader, Chukwuma Onyema; Hon. Akeem Adeyemi; Hon. Dapo Lam-Adesina and Hon. Olusumbo Olugbemi.

The House Leader who received the petition conveyed the resolution of the House on the matter and assured the students of the commitment of the House to restore normal academic activities back to their institution.

According to him: “When we received your petition to the House, we hurriedly left the chambers to listen to you because we understand your plight. Education is a priority for us in the National Assembly and we will look into this matter but let me bring to your attention that Hon. Segun Odebunmi from Oyo state brought a motion up on the floor of the House and a resolution was passed for the House Committee on Education to look into this matter and come up with recommendations that will guide the House because there are many unintended consequences that can come out of students absence from school.”

Gbajabiamila further assured the students that despite the rigorous process involved in transferring the ownership of their institution the House will apply a coordinated approach to resolve the crisis.

“You are not fatherless or an orphan, you have a government with your interest at heart but there are complications here because we run a constitutional democracy, your institution was established by two state governments and from your request it’s not that easy for the federal government to take over a state-owned institution because we run a democracy but there are ways we can come in because the welfare of citizens is our primary responsibility and issue of education is shared among the tiers of government.”

“I apologise on behalf of government because we must all take responsibility, since it’s about funding to improve learning environment we will urge the federal government to work on possible ways to step in,” Gbajabiamila said.