Breaking News
Home / News / AREGBESOLA IS OPPRESSING US!!! … He took our land and sold to Rotimi Obeisun – Ijesa Communities cry out 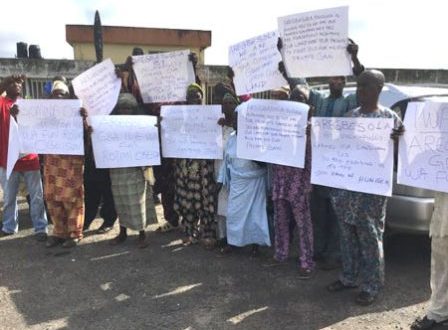 AREGBESOLA IS OPPRESSING US!!! … He took our land and sold to Rotimi Obeisun – Ijesa Communities cry out 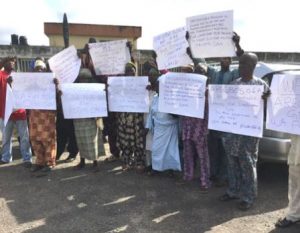 AREGBESOLA IS OPPRESSING US!!!

… He took our land and sold to Rotimi Obeisun

About 15 Ijesa communities in Osun State on Wednesday stormed the premises of the state High Court in Ilesa, protesting against what they called illegal acquisition of their land by the state governor, Mr. Rauf Aregbesola.

The protesters from Obokun and Oriade Local Governments of the state accused Aregbesola of allegedly using the state apparatus to forcefully seize their land measuring over 450 hectares for private use.

They denounced the state governor’s action while also displayed placards with different inscriptions, some of which read, “Aregbesola, this is oppression”, “Aregbesola, free our land”, “You take our land unlawfully for your friend”, and so on.

Speaking to journalists during the protest, Chief (Mrs) Elizabeth Adeniyi, Prince J.A Adewunmi and Mr. Iyiola Olanipekun explained that they had earlier been approached by “a bosom friend of Aregbesola known as Bashorun Rotimi Obeisun who said he wanted to use the land to cultivate rice”.

“We refused Obeisun the purchase offer for two reasons. One, the land is our farmland where over a thousand people are making their living and secondly, we have ancestral attachment to the land. We have cocoa, kola-nuts, palm trees and many other things on our land.”

“Suddenly, we discovered the presence of the state officials and some of the family members of Obeisun on the land. At a point, we were all chased out of our land by gunmen and on May 17, it was published in a national newspaper that our land had been acquired by the state government,” Chief Adeniyi stated.

Adewunmi disclosed that in the process of the forceful acquiring of their land, several farm crops were destroyed while means of livelihoods of many family members were shattered and many of them are still being traumatized.

Meanwhile, a human right lawyer, Barrister Kanmi Ajibola has instituted a suit on the matter on behalf of the affected communities against the state governor.

The lawyer was asking Aregbesola to pay the communities a sum of N50 billion for trespass, brutalization of the plaintiffs and members of their families and destructions of their farm crops.

He chided the state government for not even serving the communities any personal notice for the purpose acquiring their land and that the decision to “unlawfully” acquire their land is contrary to the provision of the Land Use Act.

He said in the statement of claim that the defendant “cannot acquire land on the pretext of public use and transfer same land to a private individual for private use”.