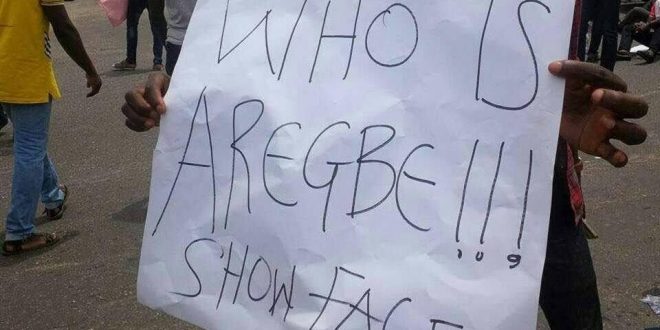 LAUTECH students protest, demand payment of lecturers’ salaries … Say attitude of Aregbesola and Ajimobi have ruined the future of students

Students of the Ladoke Akintola University of Technology, LAUTECH, poured into Osogbo, the Osun State capital, on Wednesday to protest the continued closure of the school and demand for the payment of about nine months salaries owed their lecturers.

The students, who were virtually angry, brandished placards with various inscriptions, sang anti-government songs, accusing the Oyo State Governor, Abiola Ajimobi, and Rauf Aregbesola of Osun State of plunging the school into its current difficulties.

The institution is jointly owned by Osun and Oyo states, but has been plunged into an industrial crisis following poor funding of the institution by both states.

The coordinator of the National Association of Nigerian Students in the South West, Saheed Afolabi, told journalists during the protest that the attitude of the two governors to the situation had ruined the future of many students.

“The governors of the two states must show commitment to education and they must take the issue of LAUTECH seriously,” he said.

“The university was closed for about nine months in 2016; the workers were begged to resume and they did with assurances that they would be paid but after paying one or two months, the governors stopped paying subventions.

“They have not shown in any way that they have the interest of the students at heart and that is not fair. They should let the public know whatever they want to do with the university.”

Lawal Mushau, who coordinates LAUTECH students, remarked that the university had lost its glory due to poor funding by the governors of the two states.

According to him, the students came to Osogbo to stage the protest in order to further draw the attention of the governor to the plight of the students of the institution.

Mr. Musbau said lecturers were now doing skeletal services in the university because they had not been paid for eight months.

“Even since the ascension of the current government, LAUTECH has not only degraded in value, norms, and standard but has also lost dignity amidst fellow varsities due to political instability and poor funding as caused by the two visitors, Oyo and Osun: Governor Rauf Aregbsola and his counterpart, Senator Abiola Ajimobi,” he said.

“After nine months of strike action embarked on by the school’s unions, due to the non-release of monthly subventions, the two governors are yet to be alive and active to their responsibilities as the founding fathers, after spending three months in the school, the ASUU and the Joint Action Committee of the university are on partial strike.

“The situation has stagnated every student in a spots ice 2015 till now especially two years for a semester.

“Some of our agitations are the immediate reopening of the school for academic activities; payment of subventions to enable workers to commence work.

“The governor ( Aregbesola) should endeavour to pay up to what his Oyo State counterpart paid to avoid misunderstanding in subsequent payment. While the audit is going on, the governor should pay three or six months salary to ensure a quick resumption of academic activities.”

@CitizenOsun
Previous Adewole: Why Buhari Couldn’t be Treated in Nigeria
Next Cancer: Halima Abubakar heaps curse on people spreading rumour … Says “I had fibroid, not cancer”