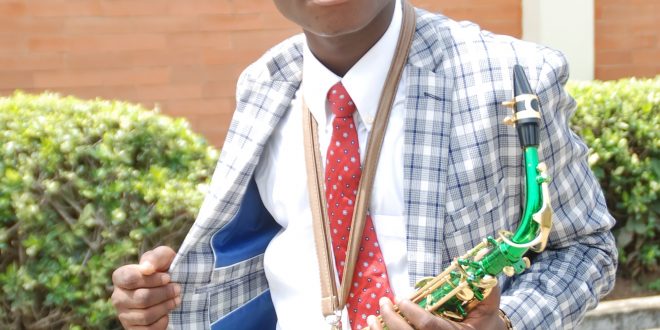 I want to be Among All Time Five Best’ – Budding Gospel Act, Pri_ce_less 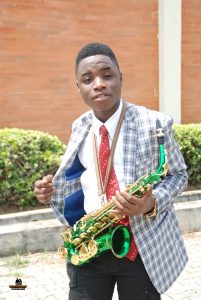 I want to be Among All Time Five Best’
– Budding Gospel Act, Pri_ce_less

Just like a lot of young people are catching the bug of going into the music industry, fifteen year old Olaoluwa Fadiji a.k.a Pri_ce_less, is also an up-coming musician, but what stands him out is the fact that he’s not fascinated by the glamour of circular music, instead, he’s made up his mind to spread the word of God through his talent. The young man also has an edge that speaks volume, his ability to play musical instruments.
The matured and articulate young man, Pri_ce_less, in this interview discussed a number of interesting issue that include, his decision to sing gospel, D,Banj’s influence on him and his vow to become a millionaire before attaining age eighteen.

He also spoke about how he intends to change the world through his music, doing music with schooling, on-coming album and his aspiration among others.

My name is Fadiji Olaoluwa Elisha. I’m also known as Pri_ce_less. I’m a student of Kings College, Lagos. I’m in SS2 presently, going to SS3. I am an upcoming artiste, I am also a saxophonist and I play other musical instruments.

What attracted you to musical instruments?
I saw this video of D,Banj playing mouth organ( Harmonica) and I told my mummsy to get me one. I was still like eight years old then. She got it for me and I started playing it, from there, I moved to other instruments. The little idea I used to play the mouth organ (Harmonica) was what I used to play the rest, from keyboard to drums, drums to sax, to clarinet and all.

Are you saying you never took any formal training before you could play them?
No. expect when my choir master correct any error I make.

So how good would you say you are if you want to rate yourself?
On a scale of one to ten, it’s seven.

What influenced you into being a musician?
I am this kind person that comes up with different ideas, inspiration comes to me very well and anything around me I turn it to a song, and I decided to go into music since God actually assisted me a fine voice in my own little way.

Lot of young ones coming to the industry are fascinated by either the glamor or the money. Are you saying none of these is an attraction for you?
If you are not in it for little profit, trust me, you are not human. Let’s put it that way. Obviously, I want to make profit, but it’s not a major priority. My own is just to fulfill all righteousness and all.

What genre of music do your song fall into?
It’s called gospel hip-hop.

Why Gospel hip-hop?
Instead of doing something that will take me to hell…I dearly love God and I want to make heaven, so instead of going to the wrong way, I decided to go to the right path by spreading his word through the talent he has given to me.

Lot of popular musicians actually started in the church but later call themselves inspirational singers and eventually doing circular because they find gospel limiting them.

How long do you think you can sustain doing gospel?
Inspirational songs, I think that will be my last bus stop. Even if I have to change from being a gospel musician, I don’t think I can go beyond the inspirational singing.

So, who are your role models in music world?
Don Moen, Mike Abdul….i actually like Pato Ranking.

What fascinates you about Pato Ranking?
I like his spirit. He’s like too energetic, he’s not sluggish. For Don Moen, he gives me inspiration. And Mike Abdul, he’s very spiritual person.

Are you doing any projects?
Yes, I am working on a project presently. It should be launched in summer period. It would have been launched earlier but I have school to go to and exams, so it waits till summer.

Tell us more about the project?
The producer is HOD, and artistes that I am working with, we have Chee, Mike Abdul and Lynxx. And it’s just five tracks.

Is there any inspirational thing in it?
No, it’s all gospels.

What is the title?
There is no title yet. I am still waiting unto God for that.

What would your likely projections of the album be when it’s out?
I would want it to be a source of encouragement to teenagers like me, that the sky should not be our limit actually, that we can go beyond. That’s my aim. And I hope the album goes around the world.

How are able to do music and schooling together, particularly that you are secondary school?
Music, I do it during holidays and during schools days, I go to school. That is one of the reasons the albums is being delayed.

I know of a school boy who had to drop in school for a year because music he was doing was affecting his grades. Are your grades not affected?
May be that person is not organized. I set my own limit and I decided to do music during the holiday and go to school when it’s time for school. May be once In a while I take a break over the weekend and go to the studio to freestyle and all, that one is different. But it’s not right for me to be doing music during school, it’s not just right. It can’t even work out for me.

I am wondering how you were able to convince your parents you wanted to do music?
I didn’t try to convince them actually. They actually support me because music is a thing that runs in our family.

That’s interesting. Can you let us into it?
My father plays the Conga, and mumsy, she sings. And they feel it’s a big opportunity for me, and instead of setting me back, they decided to encourage me.

Don’t they get worried that it could sometime be a distraction to your studies?
Hmmm….when they feel so, they just stop everything for me for that period and later, they allow me continue.

How did you come about the name Pri_ce_less?
My name is Olaoluwa, wealth of God. There is nothing wealth of God can’t buy, its pri_ce_less, so it’s just simple human logic.

What inspires your songs and where and how do you do your writings?
I do my writing anywhere, anyway, at times in class, but when the teacher is not there obviously. And what inspires me is David, King David in the bible. A king that was dancing when they returned the ark of God. Despite his position, he did not care, he kept on dancing. That inspires me a lot and of course other things.

What would say is this thing that stands you out?
That should be when I am singing on my sax. When I’m doing a solo on my sax, you would know that is Priceless.

Do you believe one should be born again before doing gospel music?
Obviously! For you to spread his words, you have to believe in him. If you are this kind of person that says, do as I say, don’t do as I do, as they say, you are deceiving yourself. There is this saying that says you have to change yourself before you can change the world. So if you know you want to be a gospel singer, you should be a true believer.

Is there any music act you see as a threat to your talent?
I won’t see him as a threat though; I would actually feel I can make that person a mentor. That is BJ Sax. The way he plays his sax, I am like can I top this? Can I play better than this? Yes. When I listen to him, I actually learn from him, I try to pick one two things I can reform that will make me sound better. I won’t say I see him as a threat.

What kind of person is Pri_ce_less?
I would say I am social. I am funny, you can’t be sad around me. I would just hit that spot that will make you laugh.

What are your aspirations?
Aside of my music, I want to become a millionaire before I am eighteen. That one is sure. And I hope my album launch will take me a step further to that desire. Also, I am aiming to study Chemical Engineering when I get to the University.

What about musically?
When they are rating music generally….for the fact it’s gospel doesn’t mean you can’t make the first five best, so my aim is to always be among the best five. Not only in the gospel industry but music in general. 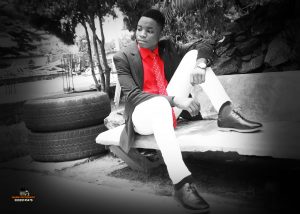