Breaking News
Home / Event / Roll call of who is who at IBB’s daughter; Halima’s wedding 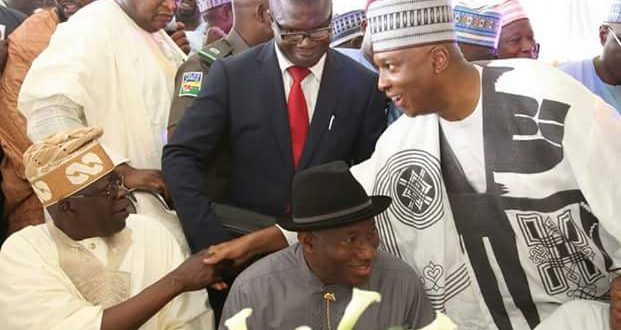 Roll call of who is who at IBB’s daughter; Halima’s wedding

FORMER President Goodluck Jonathan and his wife, Patience; Senate President, Bukola Saraki and Speaker of the House of Representatives, Yakubu Dogara, were among top Nigerians who stormed Minna, the Niger State capital, on Friday, for the wedding of a daughter of former military president, General Ibrahim Babangida.

Various dignitaries comprising serving and former governors, members of the National Assembly, retired Generals and captains of industry, came into the city yesterday in 26 private jets. The police and the air force also deployed four aircraft for the ceremony.

General Babangida had given out Halima, the last child of the family, to a businessman, Alhaji Auwal Abdullahi, the Sarkin Sudan of Gombe.

Sheikh Wahab Wushishi conducted the wedding, while Lieutenant-General Muhammed Inuwa Wushishi (retd) performed the symbolic ceremony of handing over Halimat, at 2.45 p.m., in marriage to Abdullahi.

The groom’s family was led by the Gombe State governor, Alhaji Ibrahim Dankwambo, who received the bride on behalf of the groom.

A special prayer by Sheikh Kabiru Gombe was offered for the couple.

He stressed the significance of marriage in Islam and called on the bride to be submissive and loyal to her husband.