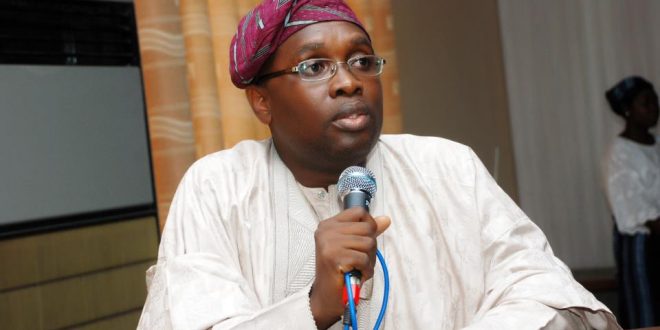 Ajimobi, Alapini, others in attendance as DAWN boss Famakinwa is buried in Lagos THE late Director –General of the Development Agenda for Western Nigeria (DAWN), Mr. Dipo Famakinwa, was buried in Lagos yesterday amidst tears by family members and other sympathisers.

Famakinwa was buried at the Ikoyi Vaults and Gardens after a funeral service held at the Chapel of Christ the Light Church, Alausa, Ikeja.

The interment was witnessed by the wife and children of Famakinwa, Governor Abiola Ajimobi of Oyo State, retired AIG Tunji Alapini as well as friends and colleagues of the deceased. Paying tributes to the late DAWN chief, Ajimobi expressed sadness that one of the brightest, dutiful and committed citizens of the South Western part of Nigeria has gone.

The governor had last week described the death of Famakinwa as a rude shock and a loss too much to bear.

“The energetic young man was always prepared to sacrifice his time, expertise and resources to ensure the integration of the South West. “He was a rallying point for all the stakeholders in the south west developmental agenda. “He has left us when his wealth of experience is still much treasured,’’ the governor said. Famakinwa died in a Lagos hospital on April 21 following a brief illness.

@CitizenOsun
Previous WHY MY FIRST MARRIAGE FAILED! + What Attracted Me To My New Husband – Foluke Daramola
Next LIL KESH: FROM ILESA TO BARIGA