Breaking News
Home / Interview / Yes, Adeleke brought me to politics but i will remain loyal to Aregbesola 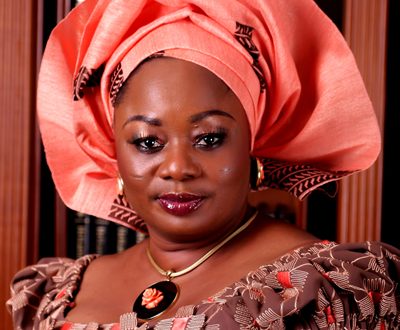 Yes, Adeleke brought me to politics but i will remain loyal to Aregbesola

Idiat Babalola, one of the commissioner-nominees of Governor Rauf Aregbesola, who was attacked on Monday during the burial of Late Senator Isiaka Adeleke in Ede, Osun State in this interview by OLUWOLE IGE bared her mind on the incident and some other sundry issues.
What was going through your mind when that mob came for you at the burial of Senator Isiaka Adeleke on Monday? Were you afraid for your life?

Actually, I was concerned about it. I was wondering what was going on. We were all there to mourn the demise of one of our leaders. Initially, I thought people were reacting to what had happened and I later realised that it was more than that. They just went loose. Like a typical human being, I was somehow worried. But God sent a saviour in person of Governor Ibikunle Amosun of Ogun State, former governor of Ondo State, Dr Olusegun Mimiko and the incumbent Governor Rotimi Akeredolu and Uncle Wale, who is my relation. In a political gathering or rally, you have people who have different opinions from your own. I never envisaged that it could go to that level of frenzy. I shouted because I was worried.

You are from Ede, just like the late Senator Adeleke. Why were your supporters not with you that day to counter that unexpected attack from the mob?

First of all, do you know my kind of politicking? I am not like a typical politician. I see myself in politics as somebody who wants to serve my people. If I was a typical politician, I would have been there with my boys. Regular politicians would go around with gangs of street boys, who would have anticipated trouble. My brand of politicking is none of this.. To me, it is not ideal for me to go around with thugs or boys. That was why I was not worried because I thought I was going to a family home. If you know the history between the Adelekes and my family, you will understand what I am talking about. Adeleke’s father and elder Adeleke, Uncle Raji Adeleke, were friend to my grandfather, who also bears Raji Babalola and the relationship between us transcends politics. As a matter of fact, both my grandfather and Senator Isiaka Adeleke’s father were good friends. They were able to pass that bond of friendship to their respective children over many years and it is continuing. When I heard the news of the death of Senator Adeleke, I quickly called my son and daughter and they had to go over to the home of Senator Adeleke to be with the children in Atlanta USA. My daughter went home with the girl and my son went to the boy in Atlanta. So when I was going to Adeleke’s house on Sunday, I knew I was going home to be with the rest of the family. Don’t forget that my father is like the head of the family now. He was surprised that I encountered that kind of experience.

It is alleged that you betrayed Senator Adeleke by aligning with his opponents. Is it true that Adeleke brought you into politics and you later started working against him?

Which opponents are they talking about? When they say somebody like me was working with Senator Adeleke’s opponents, I was confused. If you are talking about somebody from the Peoples Democratic Party (PDP), that would be understandable. But, I don›t know the opponents they are talking about. As far as I am concerned, we are all members of the All Progressives Congress (APC). I have never been accused of either working with Honourable Adejare Bello or any of these people coming out to contest on the PDP platform. If I am not fraternising with the PDP or any other party, I don’t know the opponents they are talking about. APC came up with the position that all people with governorship ambitions should hold on. We have a current administration in Osun that is absolutely committed to finish all the projects and effectively deliver good governance to the people. So, if people are declaring their ambitions and campaigning about, it would create distractions; we would lose focus. The government wants to ensure that all the projects reach a concluding stage. As far as I am concerned, nobody has officially declared his or her ambition for the governorship position. So, I had not heard of Brother Tunji’s (the late Senator Adeleke) ambition yet. When you talk of working for his opponents, that means getting information from his (Adeleke) camp and taking it to somebody else. It happens in politics.

The fact is that Adeleke brought me into politics and I never asked to be in politics. I want to tell you that every move that I have made since I have been in politics was orchestrated by God. When I was invited into Governor Aregbesola’s cabinet, Senator Adeleke knew about it. How then am I a traitor? If I work for somebody, do I not owe him loyalty? If being loyal to my principal would amount to a betrayer, I would rather remain a betrayer. Don’t forget that I am part of this government by the grace of God and my prayer is that we succeed. I would continue to be loyal to my principal. I feel elated for being nominated to be among the cabinet. What my detractors don›t know about what they did to me is that my image has been promoted. Let us even assume that there is a disagreement between me and Senator Adeleke, that is a family affair. I went there to pay my last respect to somebody who was a mentor to me. Whoever masterminded that attack was myopic because they didn›t see the bigger picture. What pained me most is that this is a period when we were mourning and see how they messed up the whole thing. But, I have forgiven them of their deeds. That is what Senator Adeleke would have done in such a situation.

How did you get elected into the Osun State House of Assembly?

I got elected by the grace of God after going through an election at a time I knew very little about politics. Before I came into politics, my people had been in politics. God gave us victory. Senator Adeleke’s structure was the vehicle I used, with which I rode or won election into the Osun State House of Assembly.

You dumped the PDP on which platform you got elected into the House of Assembly immediately the party lost power in the state. Is that a good testimony to your consistency as a politician?

No. I didn’t dump the PDP. When I got appointed into Governor Rauf Aregbesola’s cabinet, I remained a member of the PDP for over two years. What Aregbesola did was unprecedented. For a governor to pick somebody from a different party to join his cabinet is a rare feat. It is not done anywhere in Nigeria. I am not aware if any other governor had done that. Aregbesola was not looking at the party: he was looking at the capability to perform. I was not a member of his party, but I am happy that I have won his confidence. I joined when the party transformed from the Action Congress of Nigeria (ACN) to APC in 2014; that was when I became a member of APC officially. All the while, nothing stops me from hanging out with my friends from the PDP or any other party. What people who planned the attack on me don’t know is that both I and Senator Adeleke lived in Abuja at Asokoro District; our houses are a stone throw from each other. I don’t know how people think the moment they don’t see you. I don’t have that much free time to socialise. People think if they don’t see me in Adeleke’s compound, that means I don’t socialise with him. It is wrong. As far as I am concerned, our relationship was good.

You were born into a privileged home. How was your growing up like?

I thank God that I had a good upbringing. My parents were able to give me sound education. I left Nigeria in my teenage years to continue my secondary education and I went to the university and graduated as a lawyer. I also went to London School of Economics. I was in practice as a lawyer for about 10 years during which I worked as a legal adviser to Pacific Savings and Loans, which is owned by Dr Deji Adeleke, before traveling to the United States. I thank God for my upbringing and the fear of God my parents instilled in me because that was what gave me the edge and opportunities.

What is your next ambition or the ugly experience of Monday has scared you from politics?

I came into politics through the Almighty God and God might have used some people to bring me into politics. But, everything about me is designed by God. My steps are ordered by God. I make bold to say it that what I have achieved in my life are by the grace of God. If I have an assignment, I do it with all my energy and passion. For some people to say I wanted to be deputy governor, I don’t know anything about that. I have heard about it, but I know that when the time comes, where God says I would go, that is where I would be. However, I don’t have any ambition. I take one day as it comes.

@CitizenOsun
Previous OONI VERSUS AKIOLU: I will continue to respect Oba Akiolu -Ooni
Next Controversial Lasun Yusuf Again; OSUN APC LEADERS WANT TO KILL ME! … He should prove it – Osun APC Chairman