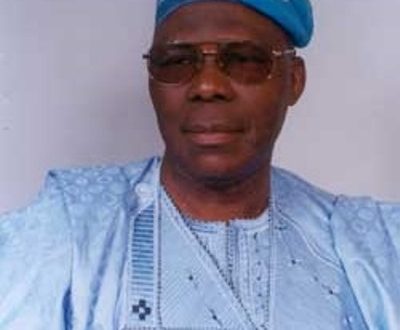 Prof Babalola Borishade, 71, former Nigerian minister of education is dead. He died in London on Wednesday after a brief illness according to News Agency Of Nigeria (NAN).

He was initially rushed to Reddington Hospital in Lagos, last week from where he was taken to London. The cause of death was lung and heart –related.

Borishade was born in Usi- Ekiti on March 7, 1946 into the Ebi Ilotin family.

He served as a minister for four times, between 1999-2011. The electrical engineer was also a teacher and a political strategist.

Between February 2001 and May 2003, he served as the Minister of Education.

In recognition of his contributions to Education in Nigeria, Africa and the World at large, Borishade was elected the Vice- Chairman of the E9 Group of the United Nations, President of the UNESCO International Conference on Education, as well as Chairman Education for All (EFA) Forum of African Ministers of Education.

In 2004, Borishade was appointed as Minister of State, Power and Steel.

Between July 2005 and November 2006, Borishade was Minister of Aviation, during which a Civil Aviation Bill was passed to replace the 1964 Act and the direct flight between Nigeria and the United States of America was restored.

His initiation of various reforms and development in the aviation sector resulted in Nigeria scoring 93 per cent in the ICAO Universal Audit which made Nigeria a benchmark to African Aviation Industry.

Recall that last year, the Economic and Financial Crimes Commission (EFCC) reopened the case file of a N5.2 billion scandal in the Ministry of Aviation under Aborishade’s watch.

Hearing on the suit filed by the EFCC against the former Minister of Aviation, Babalola Borishade, and four others took place before Justice Abubakar Sadiq Umar of the FCT High Court sitting in Maitama, Abuja.

Others on trial for the alleged offence are former managing director of the Nigeria Airspace Management Agency, Rowland Iyayi; an Australian, George Eider, and Avsatel Communications Ltd.

The suspects were arraigned by the EFCC on a 15-count charge of taking bribe and forging aviation contract documents.

@CitizenOsun
Previous FOUR MEN TO DIE BY HANGING FOR STEALING MOTORCYCLE IN OSOGBO!
Next OONI VERSUS AKIOLU: I will continue to respect Oba Akiolu -Ooni