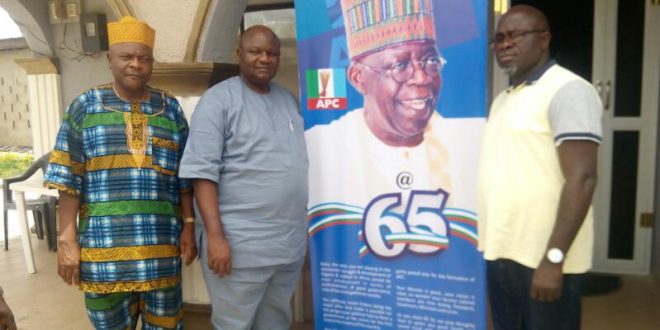 Aregbesola’s Achievements in 6Years Second to None in The History of Osun – Osun APC Chairman; Prince Gboyega Famodun ****As AGF Presents Him Tinubu’s Portrait 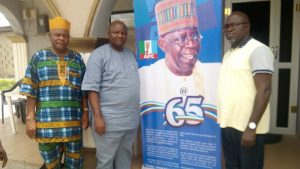 ****As AGF Presents Him Tinubu’s Portrait
The Chairman of the Osun state chapter of the All Progressives Congress (APC), Prince Gboyega Famodun has asserted that no government has ever done an average of what the incumbent Governor Rauf Aregbesola accomplished within six years of his administration in the history of the state.

This is just as the state party’s chairman described Aregbesola’s traducers as bunch of political novices that lacked intellectual statistics.

Famodun made the remarks while addressing members of the social-political organisation, Asiwaju Grassroots Foundation (AGF) in Osogbo, the state capital.

The members of the AGF were on a courtesy visit to the party chairman as part of the programmes organised in commemoration of  the 65-year birthday anniversary of their principal, Asiwaju Bola Ahmed Tinubu.

Prince Famodun who described as unprecedented the achievements of Governor Aregbesola, stressed that no governor has ever recorded such stride since the creation of the state.

The APC chairman in the state who thanked the Foundation for identifying with the state and indeed the party at its trying times noted that the APC led government in the state has visibly performed with its impacts spread across the state.

Enumerating some of the achievements of the present administration in the state, Osun APC Chairman said it is only an ingrate that would claim of not benefiting from the myriads of Aregbesola’s interventions in all aspects of the economy.

He submitted that no family has never benefited from one or two projects being executed by the present administration across the nooks and crannies of the state.

Some of the “direct impact” programmes of the state according to Famodun include, the free meals given to pupils of all the public schools every school day; construction of the state-of-the-art classrooms, free distribution of school uniform to pupils and students of public schools and the distribution of tablets of knowledge popularly called “Opon Imo” to students among other interventions in education, health, security, agriculture as well as human and capital development.

According to him, the leadership of the Osun state chapter of the All Progressives Congress cannot but extend untainted kudos to Mr Governor for being faithful to promises made to Osun residents.

“Governor Aregbesola has never disappointed us. He has never failed the good people of the state that gave him the mandate as well as the sympathisers of his party.

“If we are to rate him, it is not a gainsay, no governor has done what he did within the few years of his government, infact he has made us proud.

“So it is only an ingrate that will close his or her eyes to the obvious reality and good governance instituted by the present administration”, Famodun added.

He noted that majority of the people who have gained pleasure in defaming Governor Aregbesola in spite of his peoples-oriented programmes are ignorance of government policies.

identifying with the importance of the Asiwaju Grassroots Foundation, a product of the National Leader of the APC, Asiwaju Bola Ahmed Tinubu, Prince Famodu acknowledged the members of the AGF for being supportive to the Governor and the party in the state.

Prince Famoodun assured of the party’s utmost readiness to work with the grassroots mobilizers in the build up to the next governorship elections in the state.

“We need you to build a formidable vanguard for grassroot mobilisation, sensitisation and campaign most especially before, during and after 2018 guber poll.

“So, I encourage you to continue with the spirit of telling the people the plain truth about the government and re-orientate the already misinformed ones, with this, truth will begin to be the path and parcel of our people. 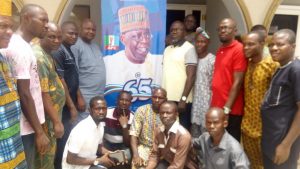 Earlier, the National Publicity Secretary of the AGF, Comrade Adebayo Adeboye, pledged the group undiluted loyalty and support for the party and Governor Aregbesola.

Adeboye said that the foundation, despite the internal wrangling within the party in the state, it is 100% behind the Governor.

According to Adeboye”  the visitation and presentation of Asiwaju portrait picture became necessary so as to be part of the millions of Nigerians to celebrate Asiwaju Bola Ahmed Tinubu’s 65th Birthday.

“Aregbesola’s uncommon achievements had made him to stand out in the comity of state’s governors across the federation.

“So it is normal and expected that such scenario will attract very many actors with diverse opinions, characters and actions especially when the incumbent performing governor’s tenure as allowed by the constitution is gradually winding down, its all about a successor.”

“Any political gladiator that will be participating in the scene of current Osun political drama must do so in consonance with laid down rules and procedures of our great party APC in the State of Osun and with the love for the welfare of the people because that is the tool that is driving Ogbeni Rauf Adesoji Aregbesola’s administration”, he stressed.