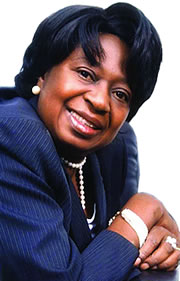 ERELU OLUSOLA OBADA’S POLITICAL INFLUENCE DWINDLES
For the people of the state of Osun, the name Erelu Olusola Agbeja Obada will continue to be in their consciousness for obvious reasons.
Obada is not only the first female to have occupied the number two seat in the state, she’s also the very first female politician from Ijeshaland and the whole state to have occupied the seat twice with her then boss; Prince Olagunsoye Oyinlola.
Even when a court of law sacked her and her boss few months to the end of their second tenure in office, she was re called by the then President Goodluck Jonathan to the Federal level to serve in the defence ministry.
This shows how influential Obada was in the history of Nigeria politics, especially in the south west between 2003 and 2015 that her party, the Peoples Democratic Party {PDP} was dislodged at the center by the opposition All Progressives Congress {APC}.
To make matters worse for Obada and her supporters, the APC also won a second term in office in the Osun 2014 gubernatorial election. Not only that, her former boss; Oyinlola shortly before the 2014 election dumped PDP and joined the ruling APC.
Not Only Oyinlola did that as another key politician from PDP; Alhaji Isiaka Adetunji Adeleke also left PDP for APC on which platform he contested and won a second term election as a senator.
Since then, it has been one crisis too many for PDP in Osun as well as the Federal level with Senator Ali Modu Sheriff controlling a faction while Ahmed Makarfi is controlling another faction.
This has obviously had a chain reaction on the party nationwide and Osun is not an exception. For this reason, the likes of Obada who used to be political heavyweights in the state have practically taken the low profile path.
Gone are the days when Obada and her supporters were the toast of all and sundry.
The situation has changed now as Obada is no longer active in her party; PDP either at the state or national level.
Erelu Obada 2017-03-30
Dotun Olanibi
Share