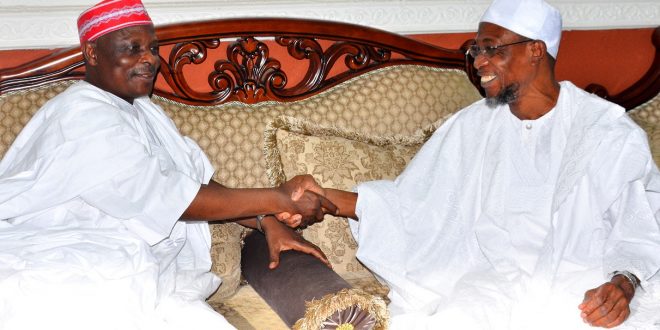 Governor Rauf Aregbesola of Osun State, on Tuesday sued for peace in Ile-ife, and enjoined the people to live harmoniously among themselves.

He spoke as the former Governor of Kano State, Sen. Rabiu Kwankwaso visited Ile-ife for on-the-spot assessment of the crisis that rocked the ancient town last week.

Aregbesola described the crisis that ensued at Ile-ife as a retrogressive trend, and very unfortunate, which required urgent attention and continuous engagement to avert such occurrence in the future.

He pledged a proactive step on the side of the government to cushion the effect of the crisis and alleviate the plights of the victims maximally.

The Governor lauded Sen. Kwankwaso for his selfless disposition and concern over the mayhem, and the efforts he had put forth to douse tension and provide solace for victims.

Sen. Kwankwaso in his remarks said he was in Ile-ife to see for himself the level of damage the crisis had caused, and ascertain the remote and immediate cause of the mayhem.