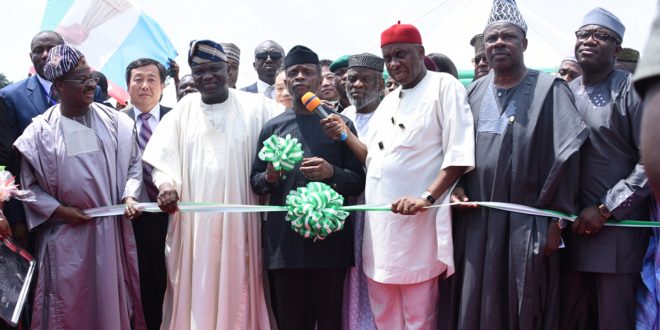 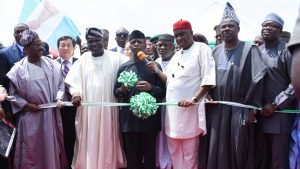 A major step to giving Nigerians a modernised railway was taken yesterday when Acting President Yemi Osinbajo inaugurated the construction of the Segment II of the Lagos-Ibadan Rail Project at the Nigerian Railway Corporation (NRC) Compound in Ebute Metta, Lagos.

It will be extended to the Lagos Ports Complex in Apapa to facilitate movement of goods.
Prof. Osinbajo said the Federal Government was committed to delivering a fast and efficient rail service system between Lagos and Ibadan with the completion of the project next December.
He spoke of government’s determination to revive the railway culture.
The Federal Government awarded the project to China Civil Engineering Construction Corporation (CCECC) at the cost of $1.5 billion (about N458 billion).
Governors Akinwunmmi Ambode (Lagos), Ibikunle Amosun (Ogun), Abiola Ajimobi (Oyo), Minister of Transportation Chibuike Amaechi, Oba of Lagos Rilwan Akiolu, All Progressives Congress (APC) Chairman John Odigie-Oyegun, Deputy Chairman Segun Oni, Senators Gbenga Ashafa and Olusola Adeyeye, Aminu Isa, among others witnessed the event.
He said the Federal Government through the Ministry of Transportation had feasibility studies on 13 new train routes to connect state capitals in accordance with the vision of the government.
Describing the event as historic, Osinbajo said the project would create jobs, stimulate the expansion of agro-allied industries and boost economic activities in towns along the corridor.
When fully on stream, the speed train, Osinbajo added, would carry about one million passengers per annum, while freight traffic along the route is also expected to hit two million metric tonnes cargoes per annum.
“This ground breaking event, which signals the first formal day of construction work on the project, signals the determination of the government to modernise the railway system.
“It also underscores the activation of the campaign promises of President Muhammadu Buhari to deliver to Nigerians world class rail project, that will not only be safe and convenient, but reliable and affordable.”
The Acting President said the project would be instrumental to the government’s march towards economic recovery and its road plans.
He said government had provided adequate marching funds for the smooth continuation of the project in the 2016 and the 2017 budgets.
He listed the reduction of freight cost, increase in the lifespan of roads, enhancement in the export potentials of the nation’s agro-allied products, among the many advantages of the speed trains.
He praised the commitment of the China-Exim Bank, the Chinese government, the Federal Ministry of Finance and Transportation for their dogged commitment on delivering on the administration’s agenda to bequeath a new train service deal for Nigerians.
Amaechi described the project as a step in the right direction to “optimise the Federal Government’s change agenda in the transportation sector.
He said contrary to old set pattern, the transportation sector is an economic index for growth and development.
The minister explained that the project involved the construction of anxillary facilities among which is the construction of eight railway stations along the corridor at Apapa, Ebute-Metta, with intermediate stations at Agege, Kajola, Papalanto, Abeokuta, Omi-Adio, a passing station at Olodo while the Ibadan station will be an intermediate station with technical operation.
The station at Kajola in Ogun State, Amaechi added, would be a locomotive workshop, rolling stock depot and marshalling yard.
Amaechi said traffic volume forecast is that the project would handle over 3.2 million tons of goods/cargoes per annum in its first year of operation, while passenger services can take 16 pairs of passenger trains.
“This train service will in the near future be extended from Ibadan to Ilorin, Minna, Kaduna and Kano and a link to the Federal Capital via Kaduna.
The minister said the project captured the acquisition of land for joint estate development partnership as well as private sector logistic park and goods platform in order to “generate the revenue for the sustenance of the rail line and in the actual repayment of the loan.”
He allayed the fears that the project could be abandoned by the government as it did in 2006, saying: “On this very one, work will not only start, but it will be completed in record time.”
Ambode described the project as a new dawn in the transportation architecture of Nigeria, adding that the speed train which is a fast and convenient means of transportation would foster regional integration and growth.
The governor, who assured that work would soon begin on its Red Line, said once all these come on stream, government would spend less on road repairs while billions of hours lost to traffic as a result of traffic snarl due to over-concentration on the roads would be a thing of the past.
CCECC President Zhao Dianlong thanked the government for believing in the firm to deliver a world class train service.
According to him, the work would create 4,000 direct jobs and increase the value in building/engineering sector among others.
Dianlong said the CCECC work portfolio raked in $188.4billion last year, with total profit put at $99.8 billion.
He said the CCECC, established in 1979, is among the top 250 global Civil Engineering Companies and had been delivering world class projects since it entered the Nigerian market 35 years ago.
Oba Akiolu urged the company to employ qualified Nigerians as senior managers and ensure that only qualified hands work in order to avoid handing over to Nigerians a bad job.
Ashafa, Chairman, Senate Committee on Land Transport, described the project as a fulfilment of the promises of the APC.
“One major aspect of this project is generation of employment. At least 250,000 jobs will be created through this project.
“Many people will be employed directly for the construction of the railway project.
“The project will bring a positive change to the economy of the people and traders will also benefit in the development,”Ashafa said.