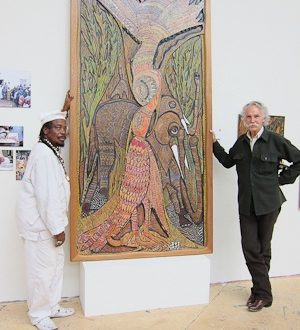 CELEBRATION OF 50 YEARS OF OSOGBO SCHOOL OF ARTS 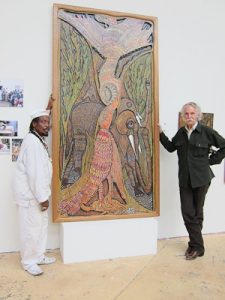 CELEBRATION OF 50 YEARS OF OSOGBO SCHOOL OF ARTS

About six years after his death, multi-talented artist, Taiwo Olaniyi, popularly called Twins Seven-Seven, gloriously returned to the consciousness of many collectors and other lovers of visual arts recently. It was at the Pyramid Thought Gallery, Abuja, where the 50th anniversary of the Osogbo Art Movement was held.

The programme organised as a partnership between the UNESCO, Ministry of Information and Culture and the Centre for Black Culture and International Understanding, Osogbo, Osun State, featured an exhibition of works of members of the movement. These include those of leading surviving members, Muraina Oyelami and Jimoh Buraimoh, who played key roles in the organisation of the programme. Also included are works of  Adebisi Fabunmi, Rufus Ogundele and Jacob Afolabi.

While many of the participants commended the signatures of the artists, the unique works of Twins Seven-Seven particularly gripped many eyes. These included synthetic woodcuts and paintings inspired by Yoruba mythology. With some titled The Blessed Voyager (pen/ink on woodcut), Village Life under Cocoa Tree (pen/ink on woodcut) and The Entertainers (pen/ink on fabric), their meanings and beauties kept unfolding to the eyes as one watched deeper. The visitor needed not to have been versed in the language of Fine Art to be arrested by the works, despite the fact that the artist did not go for showy colours. It was not surprising that they were among those that first attracted the red ribbons, which symbolised that they had been bought.

Both in Abuja and Osogbo, the programme also featured the presentation of the CBCIU journal and the DVD of Orisa Dances.

While Buraimoh exhibited brightly coloured Peacock, which showed the giant bird in its resplendent glory, Animals in the Zoo and Jolly Friends,  Oyelami had Pensive Mood, Single Parent, Princess and Village Girl on display. They came in the artist’s tradition of soil painting.

Part of the significance of the project is that it marked the return of the CBIU to limelight after months of inactivity and near abandonment – occasioned by a controversy over the chairmanship of its board. Saluting the artists and the spirit of the late Prof. Ulli Beire, who mentored many of the Osogbo artists, the Chair, Governing Board of the centre,  Prince Olagunsoye Oyinlola, gave the assurance that it would soon be put back to proper shape.

The former Governor of Osun State said the centre was proud to  promote the rich cultural heritage of the Black race in line with its mandate.

He said, “I salute Chief Olusegun Obasanjo; I want to acknowledge his worthy and patriotic effort that brought the CBCIU to Osogbo, while he was in office as the President of Nigeria. Let me also recognise with very immense gratitude, the presence of our chief host, Ogbeni  Rauf Aregbesola. Let me place on record the gratitude of the centre to the governor. This event was not planned to be held here, but by the grace of God and the understanding of the governor, he has made it possible for us to come back to this centre.”

Aregbesola was represented by his Deputy, Mrs. Titilayo Laoye-Tomori.

In a speech delivered on behalf of Oyinlola in Abuja by one the Board’s Secretary, Femi Adelegan,  he said, given its innocuous roots, nobody could have imagined that Osogbo art would become a global phenomenon.

He said, “Without any doubt, the celebration of 50 years of Osogbo School of Art is significant, as what started as an innocuous experiment on the elasticity of the creative mind and its innate ability to adapt to the vicissitudes of the environment has become a global phenomenon.”

Oyinlola further noted that the exhibition was also a celebration of the fertile imagination of Beier, Susanne Wenger and Georgina Beier because, “It is very interesting that their experiment in informal education metamorphosed into an art movement that has survived for more than half a century. From early to middle 60s, just after Nigeria’s independence in what we can truly call an age of innocence, Osogbo art began to have a trademark that uniquely distinguishes it from other art forms. The Osogbo artistic movement, as an informal art offering, coincided with the advent of the formal art school referred to as the Zaria Rebels. However, this did not in any way diminish its independent accomplishment.

Also at the event were the Director-General of the National Gallery of Arts, Mr. Abdullahi Muku, who represented the Minister of Information and Culture, Alhaji Lai Mohammed; his counterpart at the National Museum and Monuments  Mallam Yusuf Abdallah Usman, and the Acting Director General of the Nigerian Tourism Development Corporation, Mariel Rae-Omoh.

Oyelami, who narrated his experience in the past decades, said the movement actually started  about two years earlier than represented by the programme. He said, “We didn’t want to call it 52 or 53 years; we want to make it a round figure because, mathematically, 1964 to 2017 is more than 50. The main reason is to remember how we started and the contributions of people like Ulli and Georgina Beier, Suzanne Wenger and writers like Ezekiel Mphalele, Professor Wole Soyinka, JP Clark, and Christopher Okigbo.”

On his part,  Buraimoh said the  essence of the exhibition  was to “re-launch the Osogbo Artists. It’s about 52 years ago that we started and we think it’s a golden year that we have to mark. Although it is coming two years late, but nevertheless, we thank God that we are still living.”