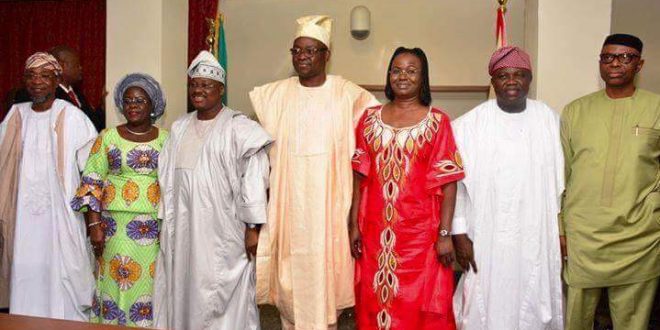 … to meet again in Ogun in April Governors of Southwest states have agreed to collaborate on regional development.
To actualise this, they set up a Regional Technical Working Group (TWG) on Integrated Infrastructural Development to incorporate multimodal transportation system.
The governors also approved the report of the workshop on security, law and order in the Southwest hosted by Lagos State.
These are part of the decisions at a meeting of the governors hosted by Ekiti State Governor Ayodele Fayose at the Government House, Ayoba Hill, Ado Ekiti, the State capital.
It was attended by Governors Akinwumi Ambode (Lagos), Abiola Ajimobi (Oyo), Rauf Aregbesola (Osun) and Olusegun Mimiko (Ondo). Ogun State Governor Ibikunle Amosun was represented by the Deputy Governor, Mrs. Yetunde Onanuga.
Fayose, who read the communique, said the Technical Working Group would work on multi-modal transportation system such as highways, rail, water and air, as well as integration on energy and power, digital and telecoms and leisure and entertainment.
He added that the governors further agreed that Odua Investment Group should serve as a special purpose vehicle to drive the regional economic integration mission, while the Development Agenda for Western Nigeria (DAWN) Commission would be supported to achieve the objectives of its establishment.
He added: “It was agreed that a Committee should be set up on Federal Government allocations in agriculture to be accessed for regional benefit.
“An expanded Committee to be set up to make consultations, give consideration and set objectives on the regional direction with regards to the Federal budget on its implementation especially on agriculture with emphasis on irrigation and storage.”
The governors resolved to strengthen the economic relations in the region.
They adopted a policy for the pursuit of common educational, security and agricultural policies for the zone.
According to the communique, the governors also said it is expedient for the zone to exchange notes in the area of security through convergence of security chiefs and other intelligence institutions to manage  the aerial, land and waterway security architecture of the zone.
They also stated their commitment to a convergence of Commissioners of Police of the states of Western Nigeria and Intelligence Institutions to meet regularly and compare notes and work together in the region to work together to manage aerial, land and waterways security in the region.
“The governors unanimous in addressing the declining moral standards and put in place structures to manage the loss of values and virtues in the society. A first step is a quality assurance and morality framework as a critical part of regional education.
“One centre each is to be donated by the governments of the states of western Nigeria as Regional Centre of Excellence,” he said.
Fayose said the governors also adopted the Southwest Regional Integrated Commercial Agriculture Development Programme (RICARD), with Lagos to champion a structured regional food exchange programme.
“We also approve the report of the sports development strategic plan of action for Southwest Nigeria. Lagos was carefully chosen to host DAWN Inter-Collegiate Games to strengthen the bonds and competitiveness among the youth in the region.
“States were also mandated to design modalities to key into the proposed rail project as a primary driver of inter-modal transportation system for the whole region”.
The next meeting will hold in Ogun State in April.