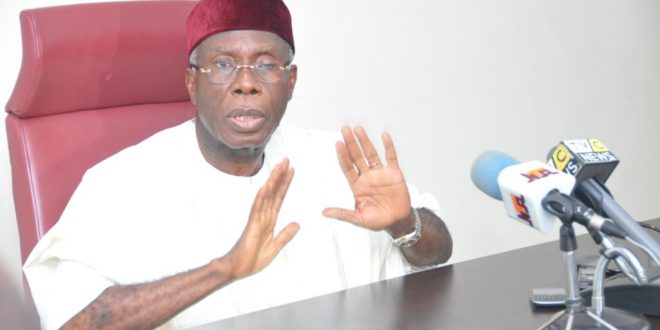 THE Federal Government has said that the inter-ministerial task force set up to address causes for the continuous increase in food prices was not meant to discourage farmers in the country.

Chief Audu Ogbeh, the Minister of Agriculture and Rural Development, told newsmen in Abuja, on Saturday that it was aimed at balancing and equalising food prices across the country.

Ogbeh, who was reacting to some media reports that the idea was anti-farmers, said it was rather intended to ease the transportation of agricultural goods from one place to another, given that high cost of transportation was a major cause of price increases.

“There is no attempt by the government to regulate prices, because it cannot work.

“What government is worried about is the high cost of transporting commodities in some parts of the country and the lack of availability in some parts while there are surplus in some other parts,” Ogbeh said.

He said the government was exploring the possibility of creating centres to enhance movement of the items from areas of production to other areas, where they were needed as a way of drastically reducing their eventual prices.

“Where there is a surplus of yams, the trains will move them down to other parts,’’ the minister said.

Ogbeh, also a member of the committee, expressed concern over some illegal checkpoints and revenue collectors along transportation routes for food items, saying this also had its impact on the price of food items.

According to him, the illegal payments made by transporters and producers  added to the prices of the produce, and were the major causes of the high cost of the items.

He expressed concern over the dilapidating nature of roads across the country, which, in the absence of rail, had become the major source of moving items, which was worsened by the operation of many illegal checkpoints.

He assured farmers and producers that the committee was currently working assiduously to achieve its mandate in their interest and that of Nigerians.

The Federal Government, on February 1, during its Federal Executive Council (FEC) meeting, set up the committee, mandating it to present a report within one week.

Aside Ogbeh, other members of the committee are the Minister of Finance, Mrs Kemi Adeosun; Minister of  Trade and Industry, Dr Okechukwu Enelamah; Minister of Transportation, Mr Rotimi Amaechi; Minister of Water Resources, Mr Suleiman Adamu and Minister of Labour and Employment, Dr Chris Ngige.