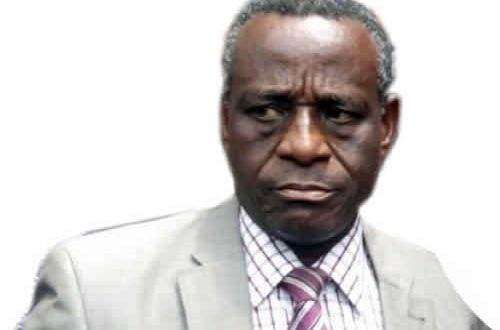 Academic and non-academic members of staff and students of the Obafemi Awolowo University, Ile-Ife, on Tuesday protested in solidarity with the institution’s acting Vice-Chancellor, Prof. Anthony Elujoba.

The Economic and Financial Crimes Commission had on Monday summoned Elujoba and the Bursar, Mrs. Aderonke Akeredolu, over an alleged payment of hazard allowance to workers.

It was learnt that the allowances paid to both academic and non-academic members of staff from the university’s endowment fund were over N1bn.

The protests took place simultaneously on the university campus and the gate of the Ibadan zonal office of the commission.

On the OAU campus, the workers shunned official duties to assemble at the popular freedom park in sympathy with the acting VC.

At the EFCC office in Ibadan, workers and students chanted solidarity songs and displayed placards with various inscriptions including ‘We say no to Omole incited probe,’ ‘OAU students say no to conspiracy,’ ‘It is not a sin to pay workers’ allowance’; ‘Elujoba is a saviour,’ ‘Don’t return us to the old days’ and ‘Omole five-year administration needs probing.’

Leaders of the unions who spoke to one of our correspondents threw their weight behind the payment of the allowances. They also demanded that the administration of a former OAU VC, Prof. Bamitale Omole, should be probed.

They threatened to pass the night at the gate of the EFCC office until the acting VC was released.

The acting VC was still being quizzed by the EFCC officials as of the time (8.41pm) of filing this report.

Addressing students who came to solidarise with him, Elujoba said, “What a pain! You all are supposed to be in the classroom receiving lectures but this has brought you here.

“We are all in this together and by God’s grace we will survive together. I have dedicated myself to the delivery of the OAU. I will not rest until I see you (students) all succeed.”

The head of Public Affairs of EFCC Ibadan Zonal Office, Mr. Ayo Oyewole, said the acting OAU VC was being quizzed over allegation of illegal diversion of funds.

He said, “The acting VC and bursar of the OAU were invited by the EFCC and are currently being quizzed at our office here in respect of an alleged case of illegal and alleged diversion of N1.4bn. According to the petition, it was alleged that the acting VC diverted the sum to settle some unapproved allowances from which he paid himself and also paid the (members of) staff various allowances.”

When asked if the allegedly diverted money was assigned to any project, he said, “The money was paid without the approval of the Federal Ministry of Education and the university’s Governing Council.”

On his part, the Public Relations Officer of the OAU, Biodun Olanrewaju, claimed that the money used to pay the workers’ allowances was hidden in a ‘secret account’ by the past administration.

He said, “All the unions are here to solidarise with the acting VC because it was shocking to hear that the OAU VC was invited by the EFCC to come and clarify why he paid workers when no money has actually been declared missing. It is strange in the history of Nigerian university system to see all the unions supporting the same cause.

The ASUU-OAU caretaker Chairman, Dr. Niyi Sunmonu, said there was no governing council in place in the university to approve such money.

“The governing council has been dissolved by the visitor, President Muhammadu Buhari, in June and since then no other one has been put in place,” he added.