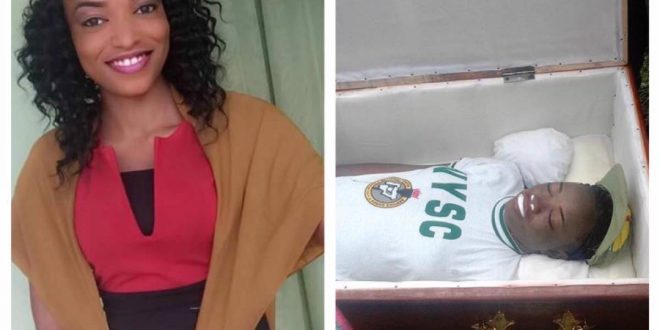 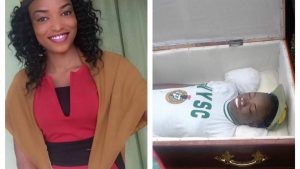 Oladepo Ifedolapo Rachel, the corps member, who died last week in Kano State, suffered from kidney related disease, it was learnt yesterday.
Director-General of the National Youth Service Corps (NYSC) Brig.-Gen. Sule Kazaure, yesterday presented the report on her death to the Minister of Youths and Sports, Solomon Dalung, in Abuja.
Kazaure said: “The deceased corps member, who is a graduate of Transport Management from the Ladoke Akintola University of Technology (LAUTECH), Ogbomosho, registered at the Orientation Camp on Friday, November 25. On November 27, at 5pm, she first appeared at the camp clinic with complaints of headache and fever which she said she had been experiencing for two days.
“On examination, the doctors noticed rashes on her legs which she claimed started appearing as a result of her using a second-hand knicker without washing.
“The doctors treated her with Arthemeter 160mg, Piriton tablet and Paracetamol and released her.
“At about 3am on November 28, Ifedolapo was brought back to the camp clinic by her colleagues, with further complaints of vomiting and general body pains. After further examination, the doctors noticed that the rashes on her legs had increased, which she still dismissed as reaction to using second-hand knicker. She was thereafter admitted at the clinic and treated with Drazamol injection and Piriton to soothe her body pains as she was already on malaria drugs.
“At about 8am on November 28, Dr. Morowei Woyingo examined the deceased and inquired about any history of drug or food allergy which could have resulted in the rashes. The deceased still insisted that it was a reaction from the second-hand clothes. The doctor thereafter administered hydrocortisone 200mg for a start.
“The doctor proceeded to invite her colleagues who converged by 9am to further examine the deceased. They noticed that the fever and body pains had subsided but the rashes on her trunk and lower limb were still obvious. They concluded that in view of the treatment she had already taken and the vital body signs normal, she should be placed on observation with IV fluid (normal saline). And that if the condition did not improve, the deceased will be taken to the hospital for a more authoritative investigation and treatment.
“As plans were being made, the deceased called her doctor at home, who requested to speak with the doctors at the camp clinic. Her home doctor further affirmed to the CMD at the camp clinic that the line of treatment given was good and the drugs administered were normal. It was at this point she complained she had not urinated for some time. This was the note of alarm that hastened her referral to Gwarzo General Hospital by 4pm.
“The deceased was accompanied by two doctors from the camp clinic, including the CMD and the nurse who was seconded to the camp clinic from the same General Hospital. They arrived at the hospital 30 minutes later and met the doctor on duty, Imran Ibrahim. Doctor Ibrahim, after examination, immediately ordered for full blood count, kidney function test, hepatitis and HIV. From the result of the investigation, the doctor concluded that the deceased had kidney infection, probably due to an untreated Urinary Tract Infection (UTI)”
“Since the potassium level was high, the deceased required immediate dialysis which was only available at the Aminu Kano Teaching Hospital, about two hours drive away. To survive the gruelling journey, the doctor decided to stabilise her by administering gluconate overnight.
“The investigation showed that the deceased responded well until about 2am on November 29 when her condition worsened, and her body began to show noticeable signs of fluid retention. She was thereafter placed on oxygen as the doctors battled to stabilise her for the long journey to Aminu Kano Teaching Hospital. She finally died at about 4am on November 29.”
Describing allegations of negligence on the part of NYSC as unfounded, Kazaure said the Orientation camp clinic had 31 qualified and registered Doctors, 20 Pharmacists and 11 Nurses.
“There are no student Doctors as all the Doctors are fully certified by the Medical and Dental Council of Nigeria (MDCN).
“The camp clinic in Kano orientation camp, as in all the camp clinics nationwide, runs 24-hour service. Hence, she received attention at 3am on November 28 when her friends brought her from the hostel. The camp clinic in Kano was well stocked with essential drugs for a non-surgical hospital.
“There was no delay in referring the deceased to the secondary hospital when the camp clinic doctors noticed her case was beyond what they could manage.
“Apart from being the closest secondary hospital to the camp, Gwarzo General Hospital is not a village hospital as being insinuated. It is a standard General Hospital established in 1970 as a Zonal Referral Hospital with surgical theatres. It currently has 11 doctors, and is reputed to be one of the busiest in the whole of Kano State.
“We have also established that at no time was the deceased left unattended at the General Hospital as the Nurse who accompanied her is a staff of the Hospital. Her close friends, Oladokun Folake (KN/16B/09640) and Mohammed Tayyiibah (KN/16B/0963), who were by her side throughout at the camp, also attested to the prompt attendance by Doctors at the camp clinic.
“Like many corps members do upon arrival at camp, it is clear she had an ailment which she did not disclose. From the doctors’ report, Ifedolapo died of renal sepsis occasioned by infection.
“Even to the untrained, kidney infections do not develop and degenerate to the level of mortality in three days.
“Ifedolapo was neither forced nor harassed to take part in any parade at the time of her ailment. There was no parade, since the swearing-in ceremony had not taken place when she fell sick,” Kazaure added.
Dalung described the circumstances that led Ifedolapo’s death as unfortunate.
While sympathising with her family, Dalung urged Nigerians to always verify information before forming conclusions.
He said the Federal Government will do everything within its powers to support and sustain the NYSC scheme rather than scrape it.