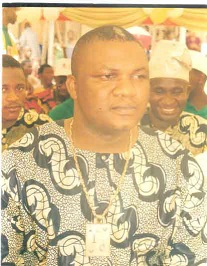 Years back, he happened to be the toast of all and sundry obviously because of his deep pocket. Alot of musicians sing his praises to high heavens, infact he got so close to many of these musicians that they are regular callers in his house where they even spend nights with him. Today, the story is different for Prince Tajudeen Abioye who is believed to be one of the associates of a London based controversial millionaire socialite who was deported to Nigeria years back.

Multimillionaire T.J of Holland as he is fondly called, has practically gone low profile. His new lease of life started years back when he was allegedly arrested in Holland for drug related offences. Although in a dramatic turn of event, he was said to have been left off the hook.

As the story goes then, in the copy of a judgment delivered by Justice A.I Van der Kris-led three-man District Court of Zwolle-Lelystad, Netherlands, dated May 12, 2011 recently, Abioye was acquitted of the allegations leveled against him.

The court, according to the judgment, directed that the EUR 2,656.75 seized from the businessman and confiscated by the prosecutor sequel to his arrest should be returned to him immediately.

The judgment noted that the evidence provided against the business mogul offered no concrete indication that the money found on him as at the time of his arrest was the proceeds of the drug trafficking allegations levelled against him, saying that it might not be ruled out that the accused acquired the money by legal means by dealing in second hand vehicles.

It reads: “The court has taken cognizance of the content of the documents of the underlying criminal file and of that which was put forward during the examination in court. The court states first and foremost that, in reply to a question put to her at the trial of 28 April, 2011, the public prosecutor stated explicitly that she had not intended to charge the accused within implicit alternative charge of culpable negligence under count one.

“In view of the fact that a public prosecutor determines the nature and scope of a criminal trial, the court assumes that the offence with which the accused is charged under count one does not presuppose an implicit alternative charge of culpable negligence.

“The court will therefore acquit the accused of count one of the indictment.

“With regards to count two of the indictment, in the opinion of the court, neither the document nor the trial provided any concrete indication that the money found on the person of the accused was the proceeds of crime. It may therefore not be ruled out that the accused acquired the money by legal means, namely by trading in, or renting out (second-hand) vehicles”, the judgment read.

The presiding judge recalled that the accused and his counsel have declared at the trial of September 16, 2010 and April 28, 2011 respectively that the money which the accused was carrying in his wallet at the time of his arrest was the proceeds of renting out Caterpillars, which is a legal business.

The court further ruled that “the court considers this argument to have been made sufficiently plausible as a result of the trial. Now that it cannot be established that the money cannot but have been the proceeds of crime – also in view of the fact that the court has not established the presence of any intent in his involvement in the transport of cocaine – the accused will be acquitted of money laundering.

“The court is of the opinion that in view of the prospective acquittal, the amount of EUR 2,656.75 that was seized should be returned to the accused”, the court declared.

But since this event happened, and after his return to Nigeria, Abioye has refused to attend social gatherings and spend money like he used to.

He now goes about his normal business quietly. A source told www.osuncitizen com that since his “narrow escape”, he has been warned to stay away from the social radar for a while at least for the dust raised to settle.

Abioye, who is one of the big boys from Osun state, hails from Ijabe in Odo-Otin Local Government Council Area of the state.

He has many business establishments in Osun State to his credit, including the popular Royal Spring Hotels in Osogbo and Ijabe,  T.J Flour Mills in Ijabe, Mineral Stone Factory in Ijabe,  T.J and Abioye Farms in Ijabe and Iba, T.J Engineering in Ijabe,  T.J Drilling Company in Ijabe amongst others.