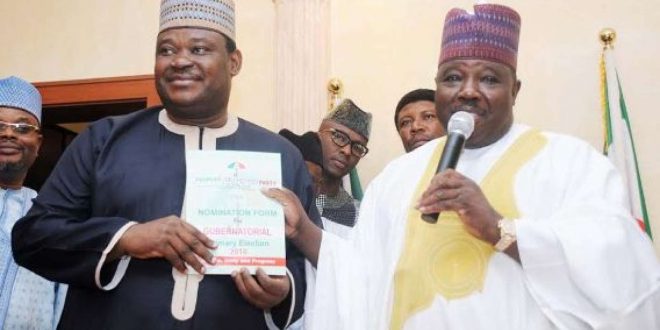 ONDO PDP CRISES: YOU CANT HARASS ME, I AM NOT FAYEMI! Jimoh Ibrahim blasts Fayose

ONDO PDP CRISES: YOU CANT HARASS ME, I AM NOT FAYEMI!

In a terse message to the governor, titled: Fayose, too early to panic, Jimoh Ibrahim said that the same horsewhip used for the incumbent Ondo State Governor, Olusegun Mimiko would soon be used on the governor.

His words: “The crisis in Ondo State PDP has not degenerated to a situation where a Judge was beaten up in his court during proceedings as it was in Ekiti State during Governor Fayose’s bid to become governor. There is no need for Governor Fayose to panic at this time as it is too early to do so.

“Fayose is advised to wait till November 27 after the election in Ondo State, as we shall move to Ekiti in full force to enforce Justice Abang’s judgement, which also covers the Executive of PDP in Ekiti State. Our movement to Ekiti will be in day time, so it is better for Fayose to prepare and also learn from the experience of Governor Mimiko, who was performing in Ondo until he was distracted by Governor Fayose.”

“Let me remind Governor Fayose that I am not ex-Governor Fayemi and it is now a payback time to treat Governor Fayose exactly the way he treated Fayemi using the framework of how the clustering disaster was resolved in Ekiti State leading to Governor Fayose’s Victory.”