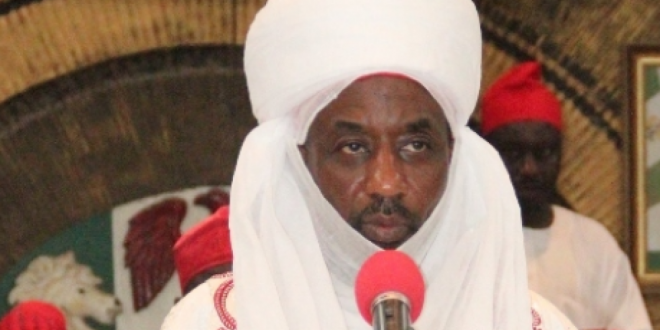 As the nation continues to wallow in recession, stakeholders, including the Emir of Kano, Muhammadu Sanusi II, have highlighted the need to focus on addressing the issues that pushed the economy into the crisis.

Sanusi, alongside the Osun State Governor, Rauf Aregbesola; and the Senate President, Bukola Saraki, gave the advice, while listing the conditions necessary to exit recession and avoid a future chaos.

They spoke during The Point newspaper’s public presentation and first annual conference on economic regeneration in Lagos on Friday, according to a statement on Sunday.

Sanusi, who was the special guest of honour, blamed the current recession on decades of policy failure, which he said had been the bane of Nigeria’s economic development.

He said, “We have had decades of policy failure. The last decade was Africa’s miracle decade, because we moved from a continent that was known for hunger and war to a decade where we were seen as a land of opportunities and investments.

“Nigeria grew at seven per cent every year throughout that period as the economy doubled, and we became the biggest economy in Africa. But a lack of policy made us lose all proceeds.”

Sanusi, therefore, advised the Federal Government to take a decisive step on the type of economy it would want to run, adding that the time had come for the government to differentiate between reality and passion.

Aregbesola noted that a decline in the price of crude oil in the international market had always been the cause of the recession the country had fallen into at different periods.

He said the difference between the past recession and the current one was that the previous ones never lasted this long.

“The fundamental problem is that we can no longer fund our imports because our foreign earnings have progressively declined, while our taste for and dependence on foreign goods has continued to increase. This is what put pressure on the naira, making imported goods to become very expensive and it put the economy in a tailspin,” the governor said.

On his part, the Senate President said the time had come for the country to diversify, stressing that it was no longer fashionable to run a monolithic economy.

Saraki, who was represented at the event by the Chairman, Senate Committee on Banking and Finance, Senator Rafiu Ibrahim, said, “The Small and Medium Enterprises, not government, not big corporations, hold the key to solving our unemployment problems, raising the Gross Domestic Product, diversifying the economy and promoting production and manufacturing in Nigeria.”

He, however, said that the country had yet to fully harness its economic potential due to the absence of adequate and deliberate interventions that could support the SME development and growth.

@CitizenOsun
Previous NO! SORRY, I HAVE TO GO AND LOOK AFTER MY SICK HUSBAND! Pauline Tallen Turns Down Ambassadorial Nomination
Next Wizkid Tops MAMA 2016… Takes Home Three Awards